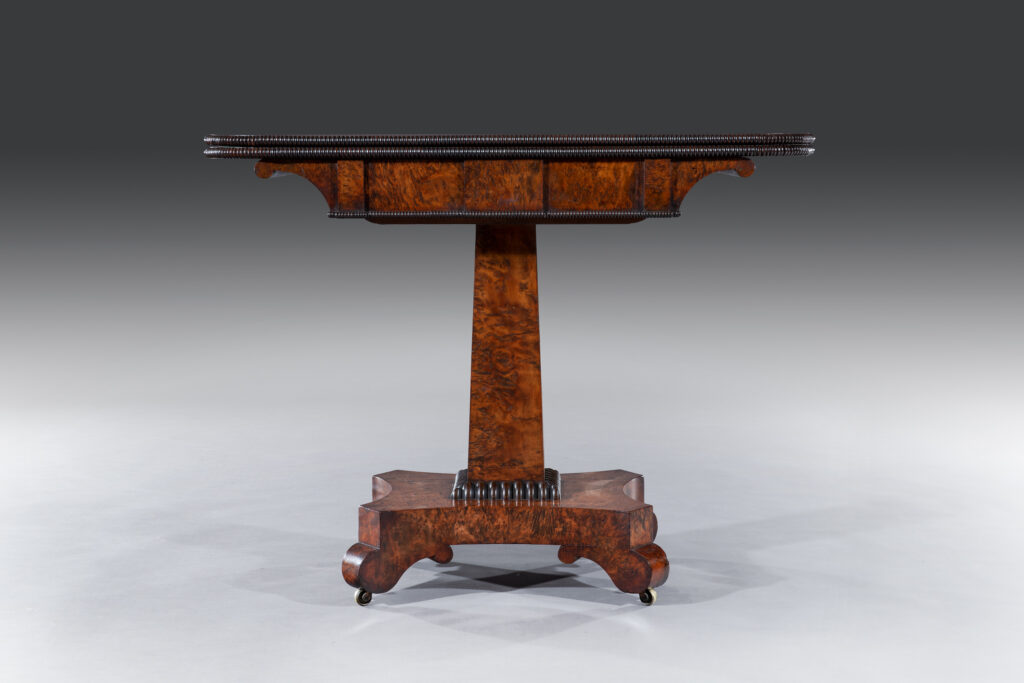 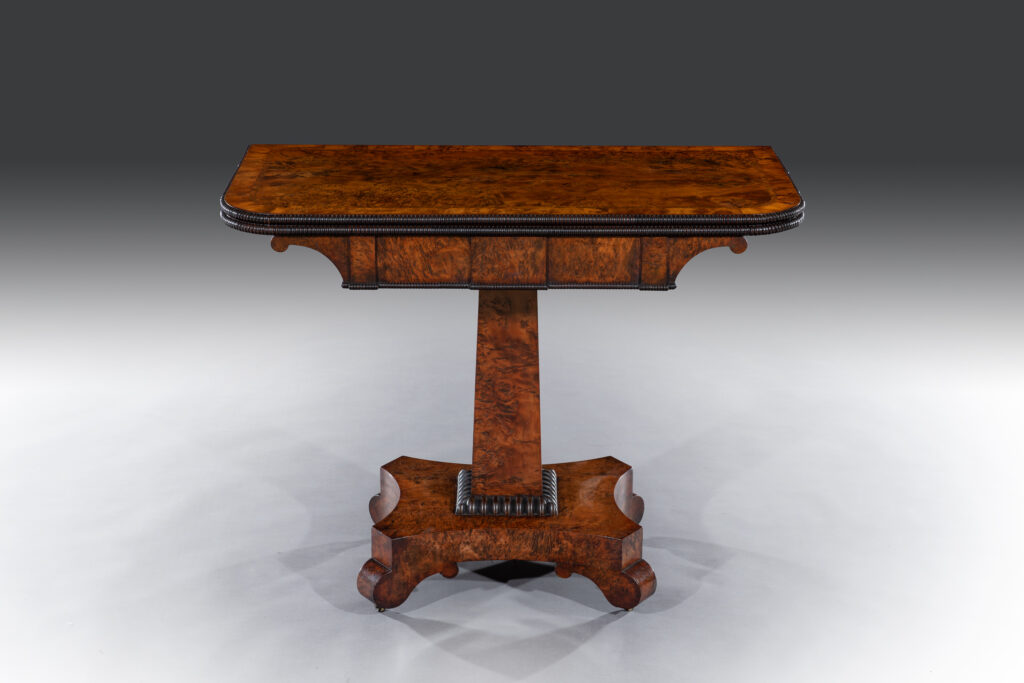 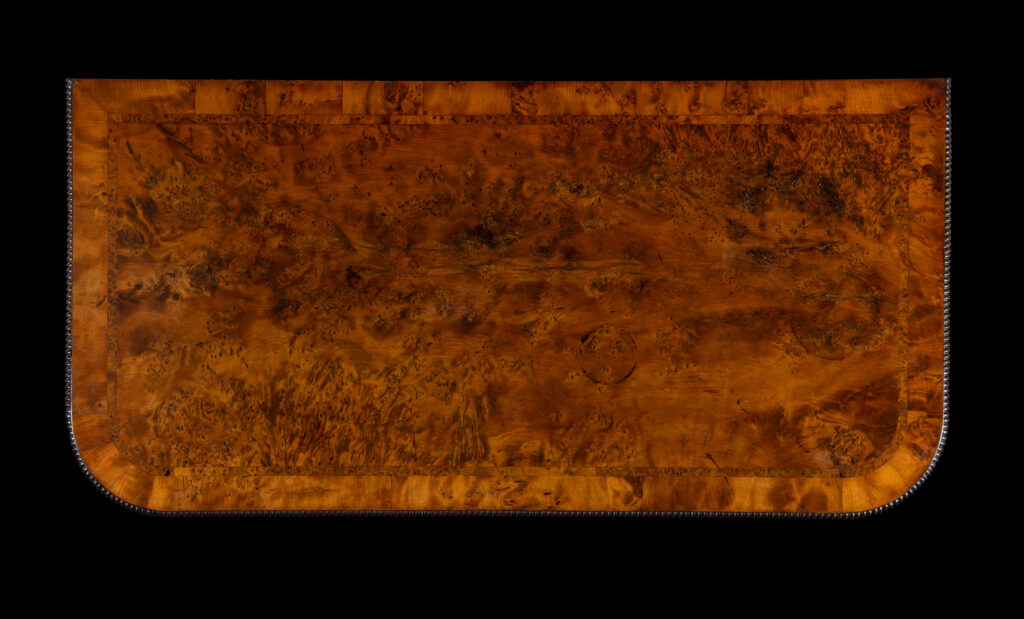 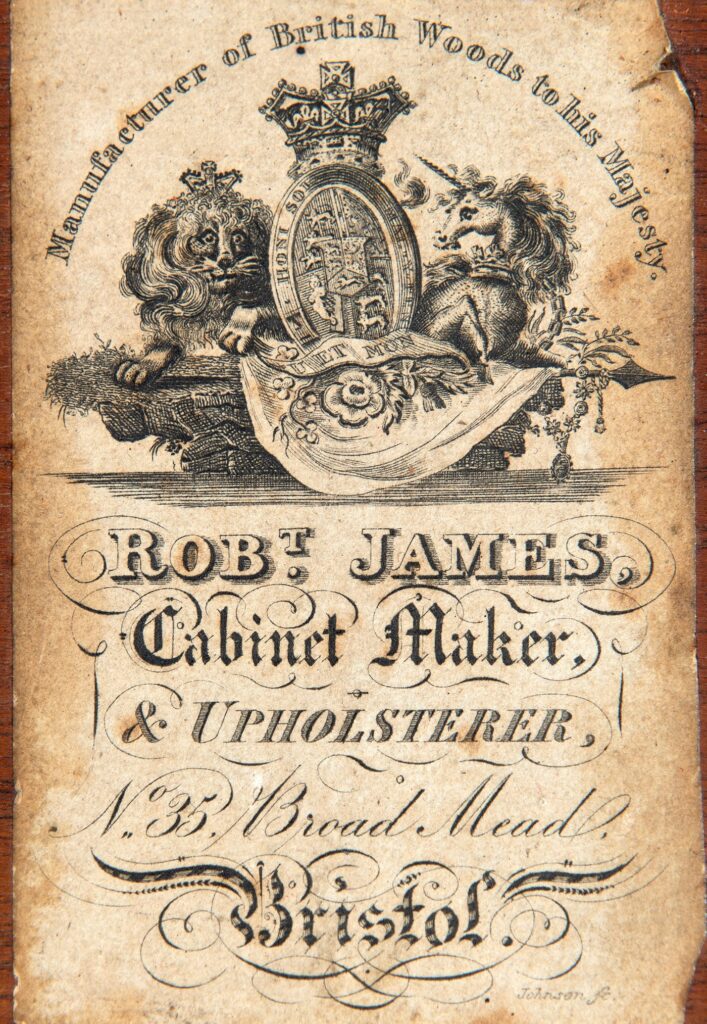 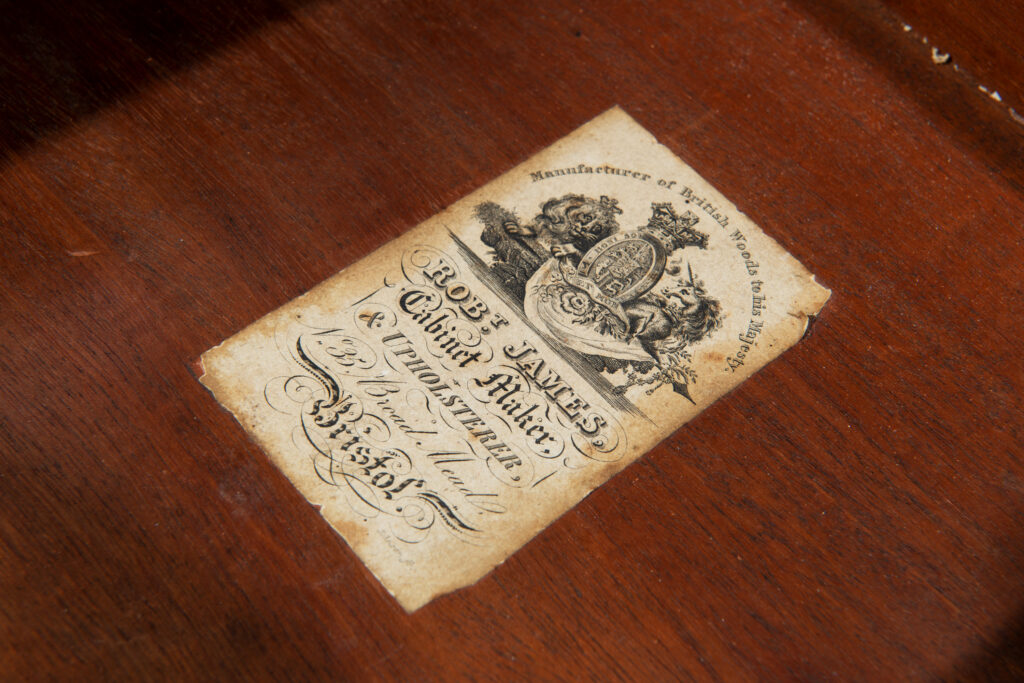 The rectangular yew wood veneered and yew wood crossbanded top retains a wonderful patination and colour. The table top veneer is in one piece rather than multiple sections which is both unusual and rare. The top opens and swivels to reveal a new replaced green baize playing surface. The playing surface is crossbanded with a broad band of yew wood with a crisply carved gadrooned edging above an elegantly shaped apron, above a neater small carved rolled moulding. The top stands on a yew wood veneered square pedestal and a bold gadrooned moulding, raised on a yew wood quatra form concave plinth base. The boldly shaped plinth base terminates on scroll feet with concealed castors.

Excellent. The games table has a maker's label.

James, Robert, Bristol, cm and u (1784 - 1831). Recorded living in the parish of St Augustine, 1784. In Terill St, 1793 - 95 and St Michael's Hill, 1799 - 1801. After 1805 the firm traded from 35 Broadmead and is recorded as Robert James & Co., 1805 - 06; James, Fry & Co., 1807 - 13; and once more reverted to Robert James & Co., 1814 - 15. From 1816 reverted to the pre-1805 style of Robert James. In 1818 he was declared bankrupt, but despite this the business quickly recovered and was probably at its height of achievement in the 1820s. In 1821 he advertised himself as the 'Manufacturer of the Beautiful Polyanthus Wood'. In the following year he received a Royal patent and thereafter described himself as 'Manufacturer in British Woods to his Majesty'. Clearly at this stage he was using woods with a wide range of colour variation and intricate grain patterns. He stated in an advertisement that 'his present manufactured stock of POLYANTHUS AND OTHER BRITISH WOODS... will be found to excel any other yet offered, for beauty of Colours, and variety to the imagination, exhibiting on its highly polished surface, Woods, Landscapes, and in some instances, Animals, Fish &c are represented, which has a grand and pleasing effect'. The Duke of York also appears to have patronised James in 1826. In the 1820s he labelled some of his products, and a number of examples are known. These include a secretaire bookcase [C. Life, 11 June 1953, p. 1882], a yew-wood table [Furn. Hist., 1966], a sofa table, yew-wood cross-banded with burr wood [Sotheby's, 20 May 1955, lot 157] and a large pedestal table veneered in burr oak and elm, and a tea caddy veneered in rosewood and burr yew, in the BM Coll. [D; poll bk; Exeter Flying Post, 26 February 1818; Furn. Hist., 1976; V&A archives] 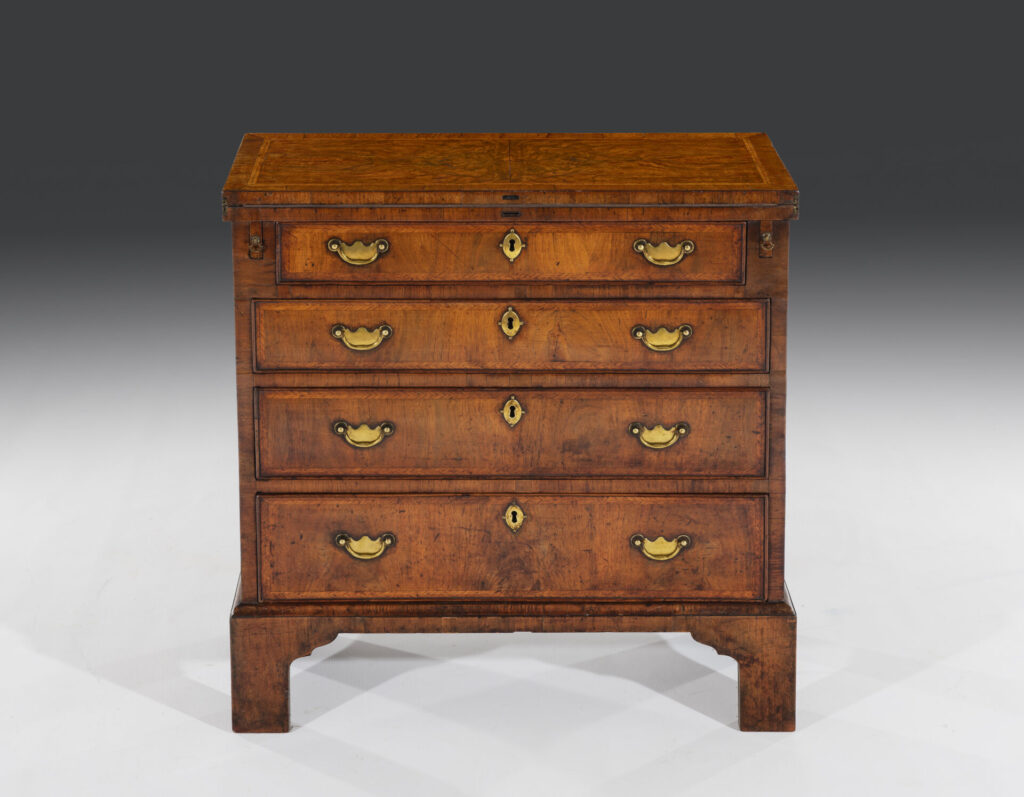 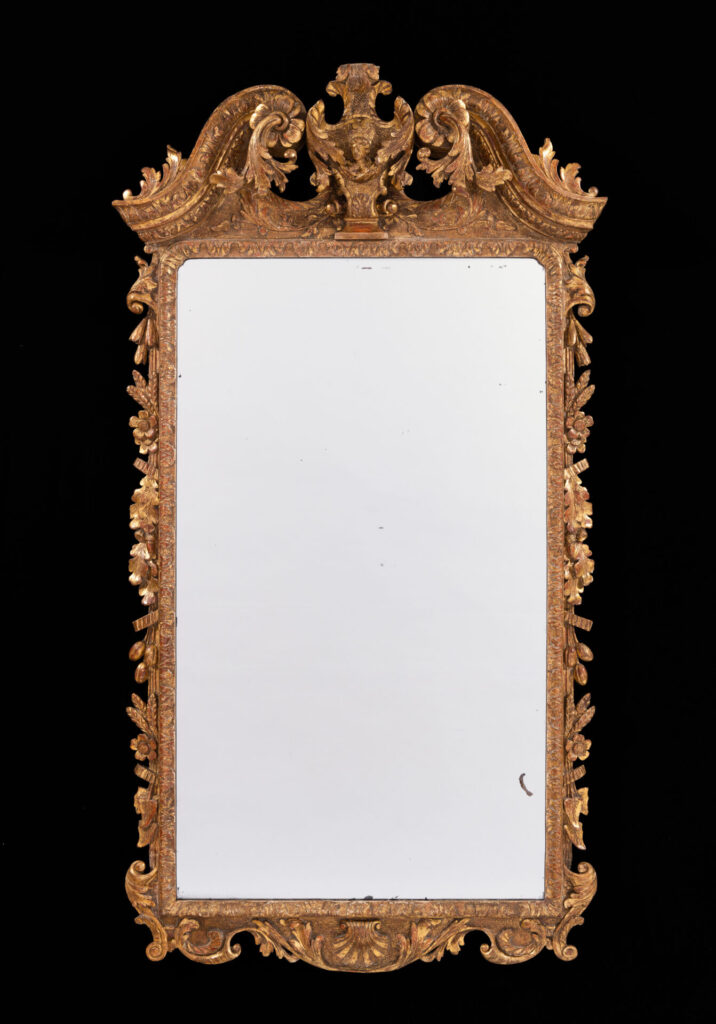 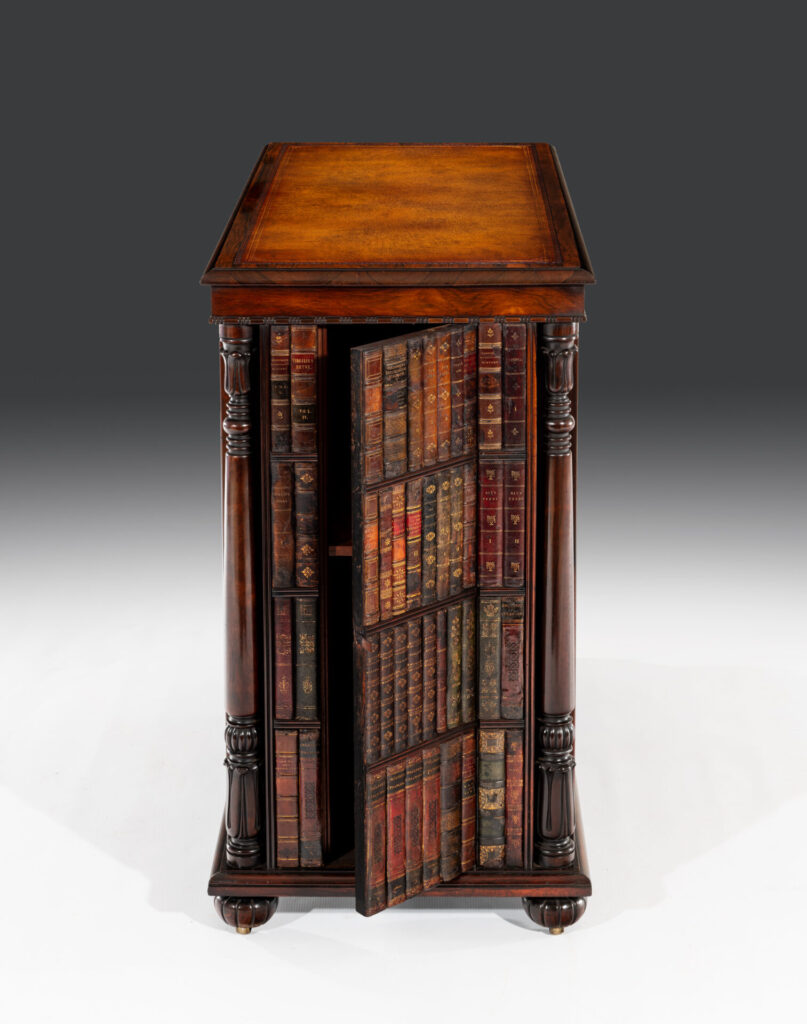