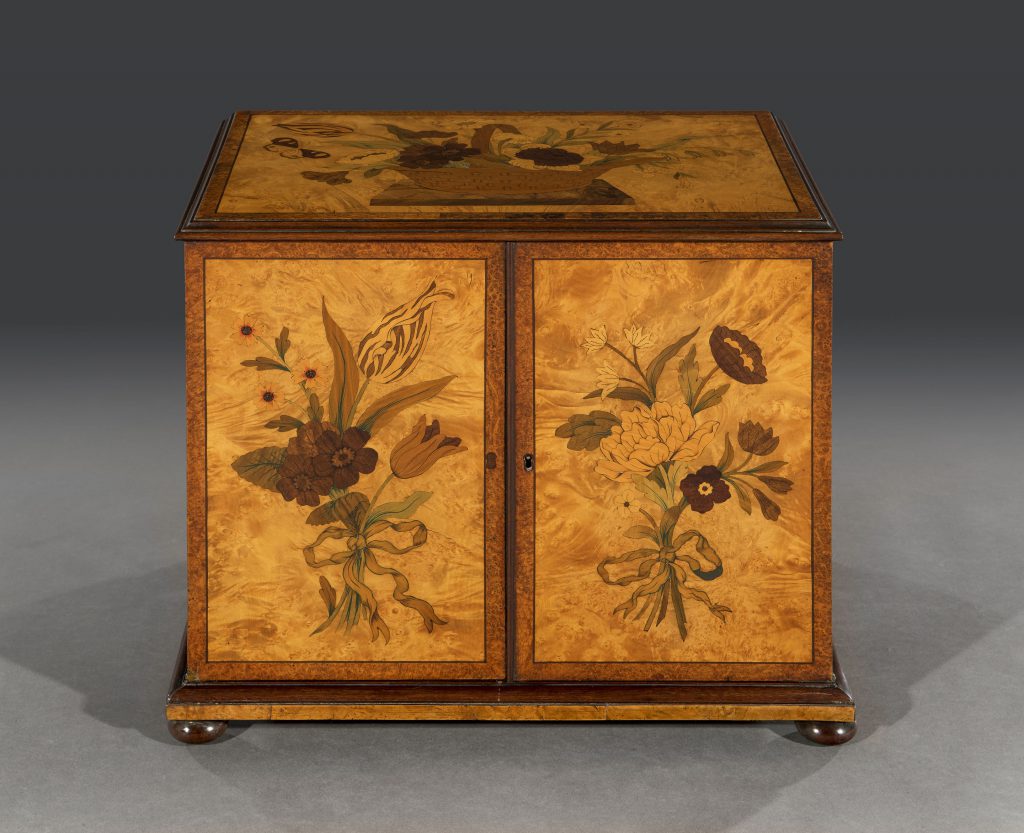 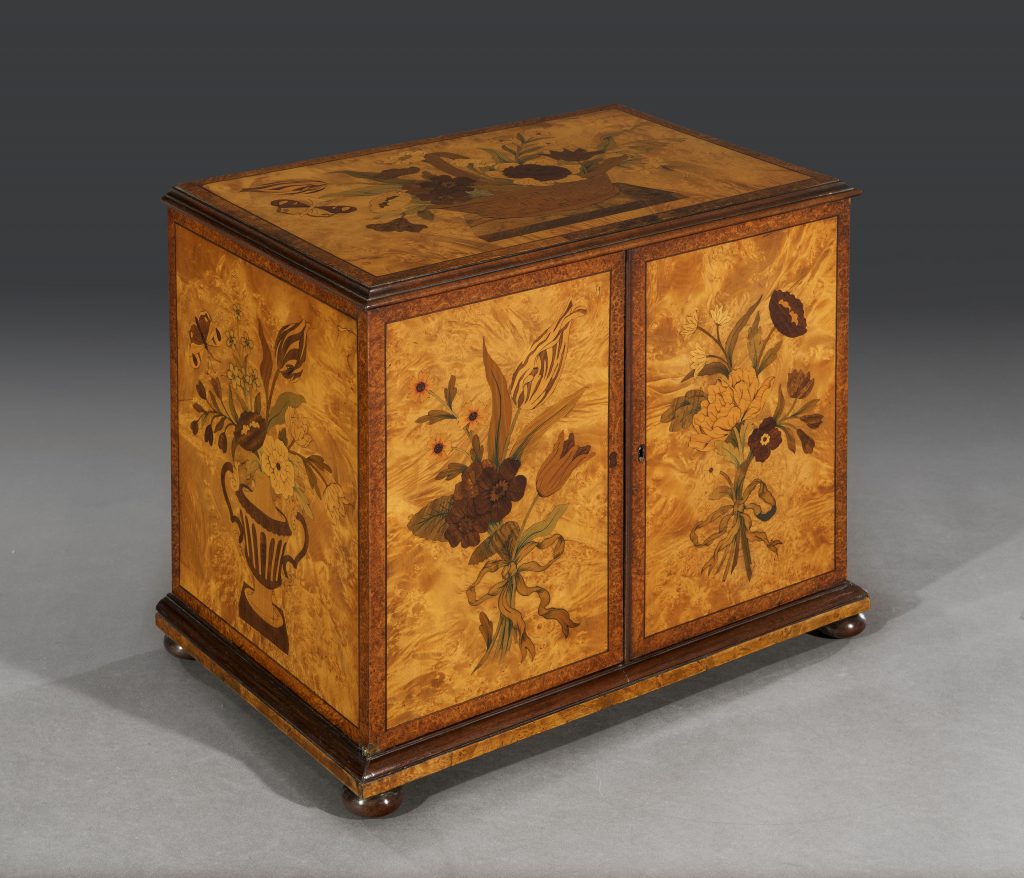 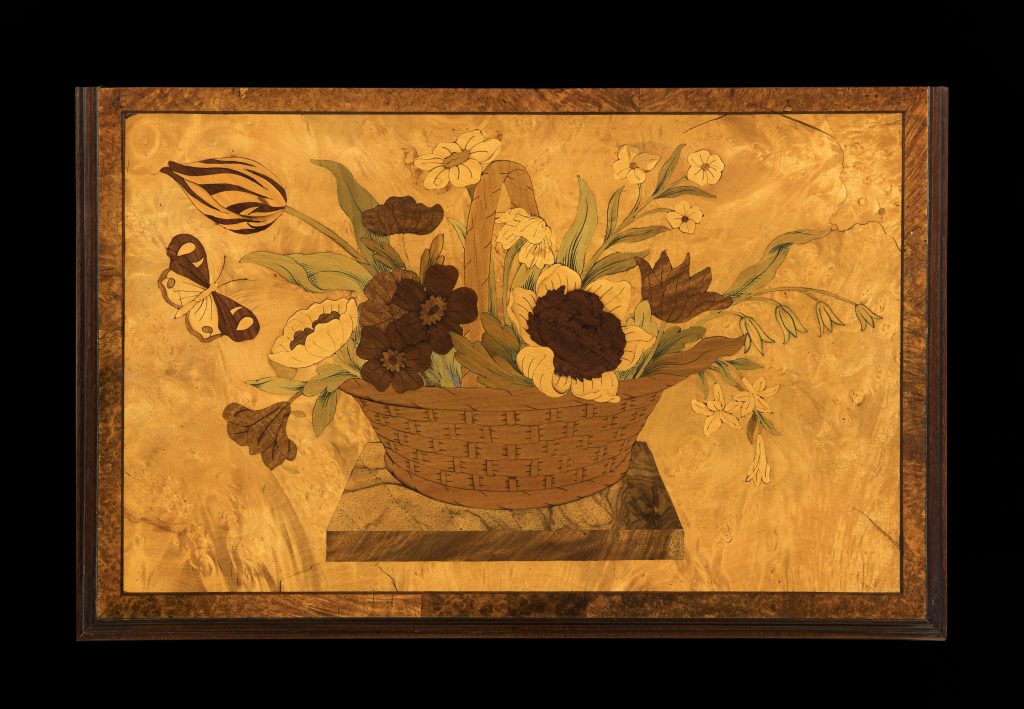 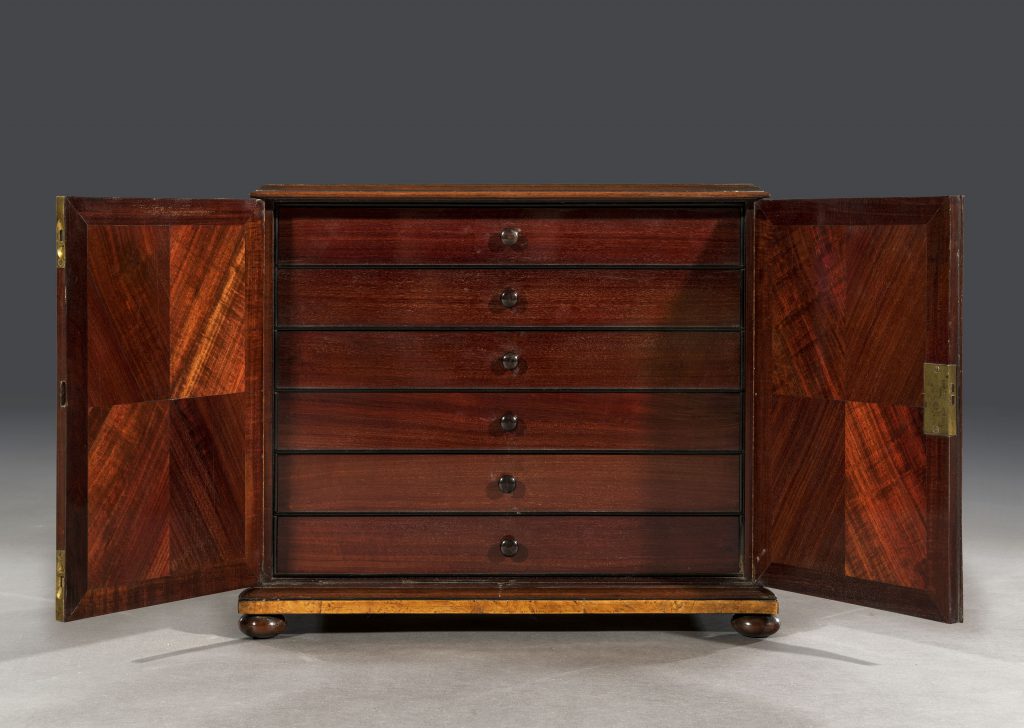 The table cabinet is profusely carved with floral marquetry to the top with amboyna and mahogany cross-banding with a butterfly and a weaved basket of flowers. The sides depict an urn with flowers and the two doors to the front display a bunch of flowers with a ribbon in the shape of a bow. Various woods have been used to create this detailed and etched display. The cabinet maker has used rosewood, walnut, harewood, mahogany, boxwood and sycamore in the floral designs. The cabinet doors open to reveal a bank of six drawers with mahogany drawer linings, rosewood knobs and ebony slats. The interior door panels are quarter veneered with mahogany veneers to the interior frames. This magnificent cabinet stands on turned ball feet.

Baldock is listed in London Trade Directories of the early Nineteenth century in various capacities. He first appears at 7 Hanway Street, London in 1805 described as a 'dealer in china and glass' and by 1821 as 'an antique furniture and ornamental furniture dealer'. By 1826 the various facets of the business included 'buying and selling, exchanging and valuing china, cabinets, screens, bronzes etc.'

From 1832-1837 he is recorded as a purveyor of earthenware and glass to William IV and later, a purveyor of china to Queen Victoria from 1838 until his death. He is known to have repaired, remodelled and adapted furniture, often 18th century pieces, but he also designed furniture both in the 18th century style and in more contemporary styles.

Pieces that appear with the E.H.B marque de fer might have been made by Baldock at his workshops but his activities link him more closely with the 18th century marchands-merciers such as Daguerre and Poirier. Interestingly, an invoice from him for restoration and repairs exists in the archives of Lord Saumarez of Shrublands Hall, who were supplied with a pair of console tables ( currently in our possession) made by the London makers, Morant & Company; Morant’s name is stamped on a centre table (also in our possession) which mirrors a centre table supplied to the 5th Duke of Buccleuch, now at Temple Newsham, stamped with the marque de fer of Baldock.

Literature
Richard Bridgens issued, in 1838, a design book ‘Furniture with Candelabra and Interior Decoration’; the design of our table is taken directly therefrom. The design was utilised often by E. H. Baldock (qv); a similar table with Baldock’s stamp is in the Temple Newsham collection; other models have appeared on the art market in recent years.

Marquetry, of similar design to that on our table, appears on an Erard grand piano, stamped ‘EHB’, exhibited in the Metropolitan Museum of Art, and has been connected with a family of marquetry workers, The Blakes, whose workshops were adjacent to Baldock’s retail premises.