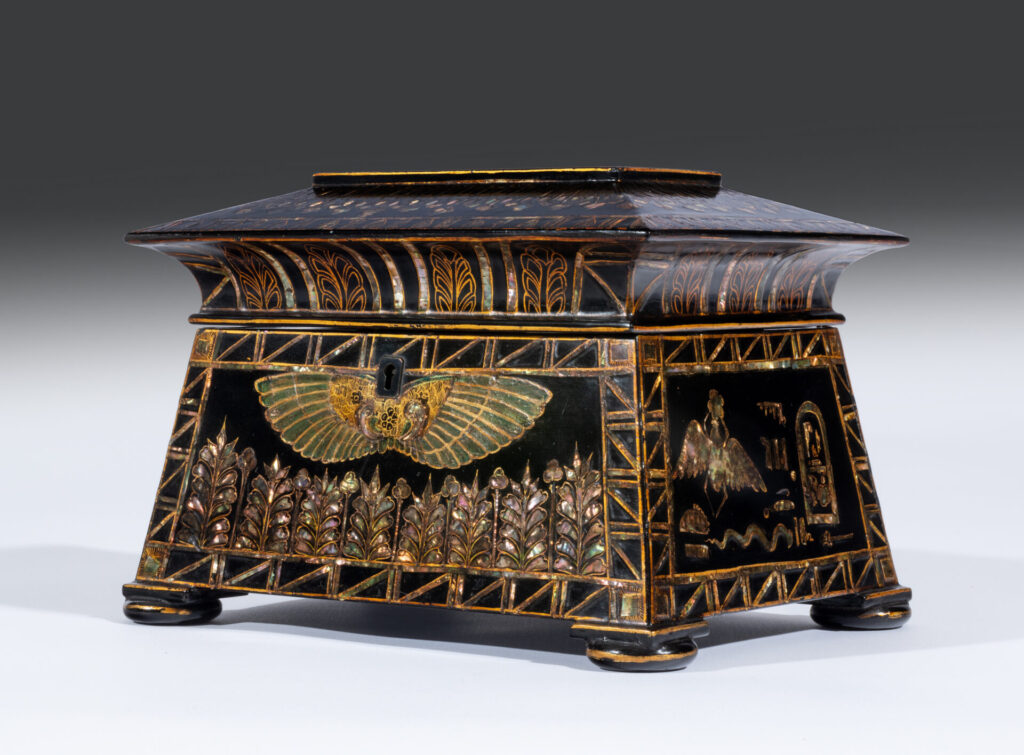 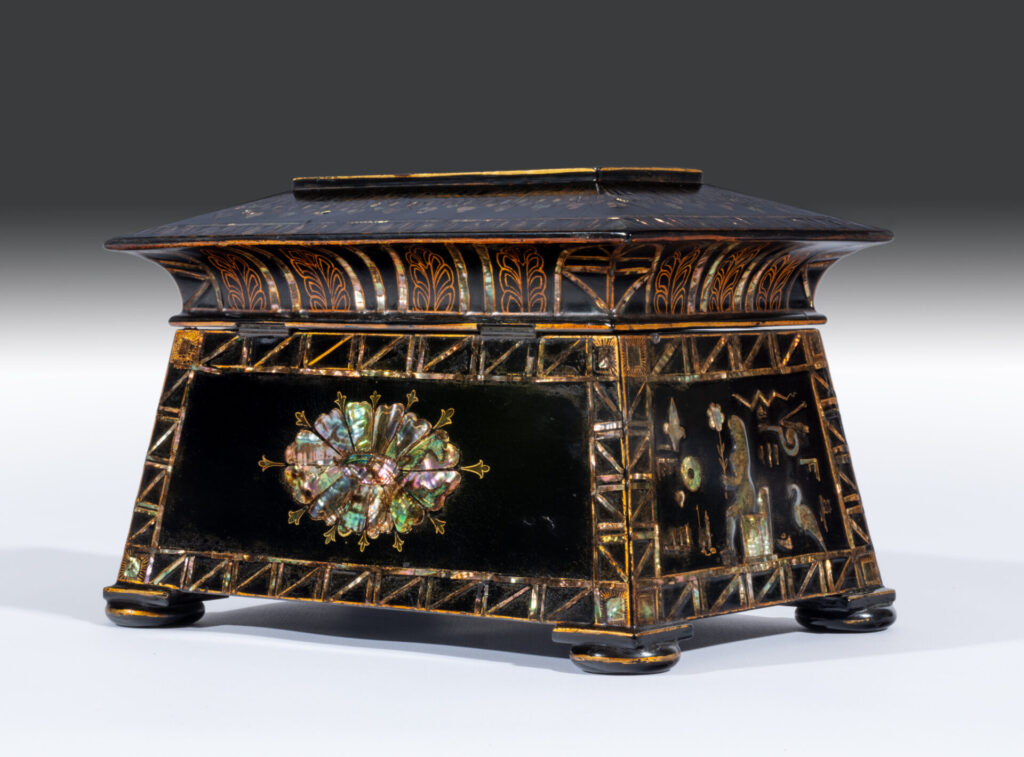 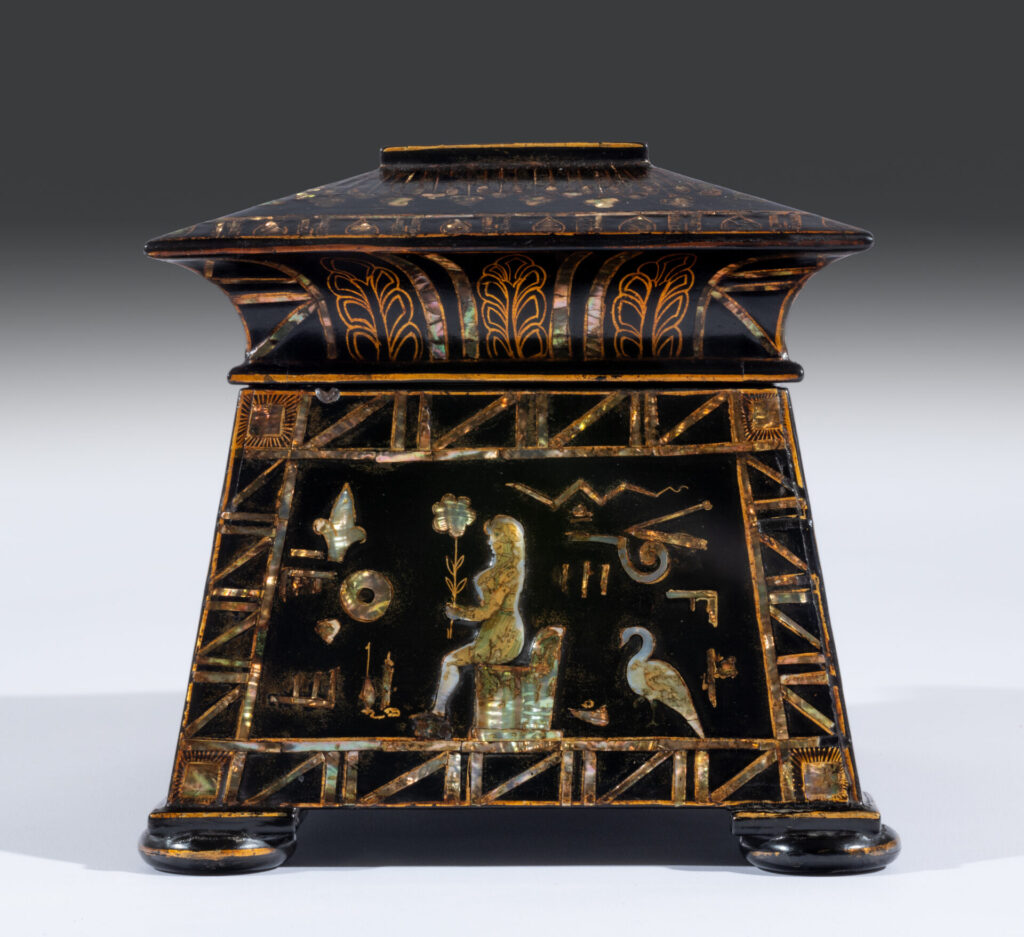 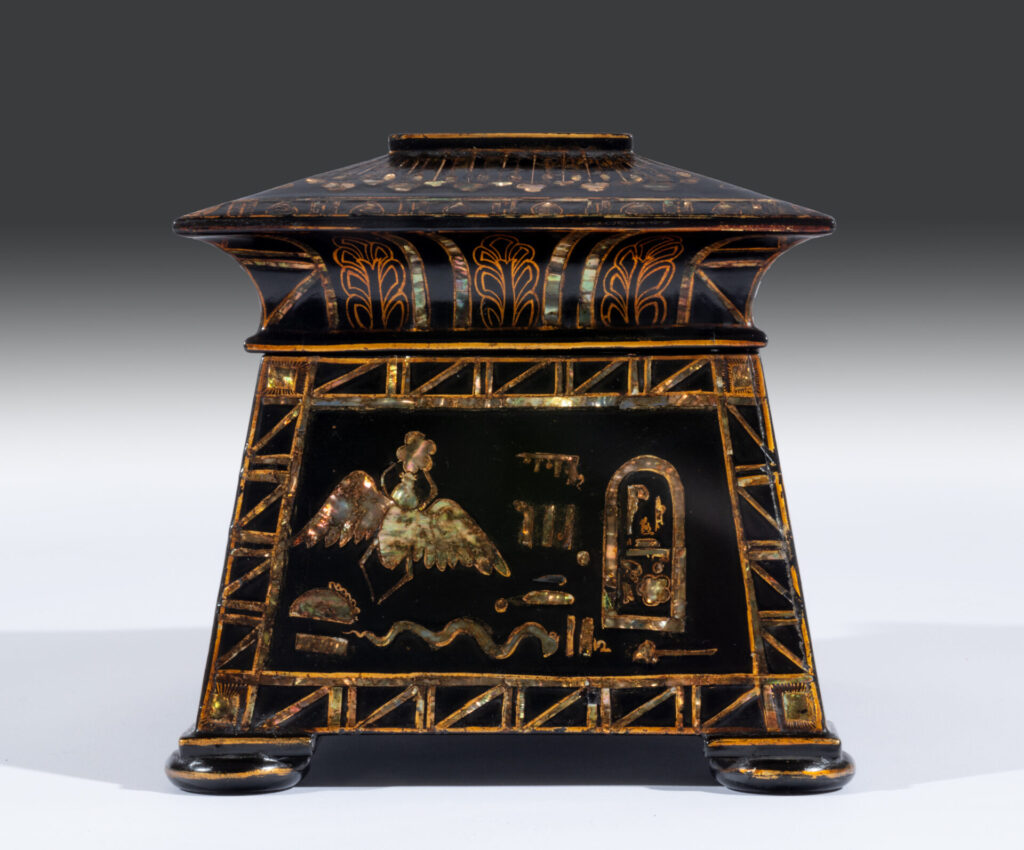 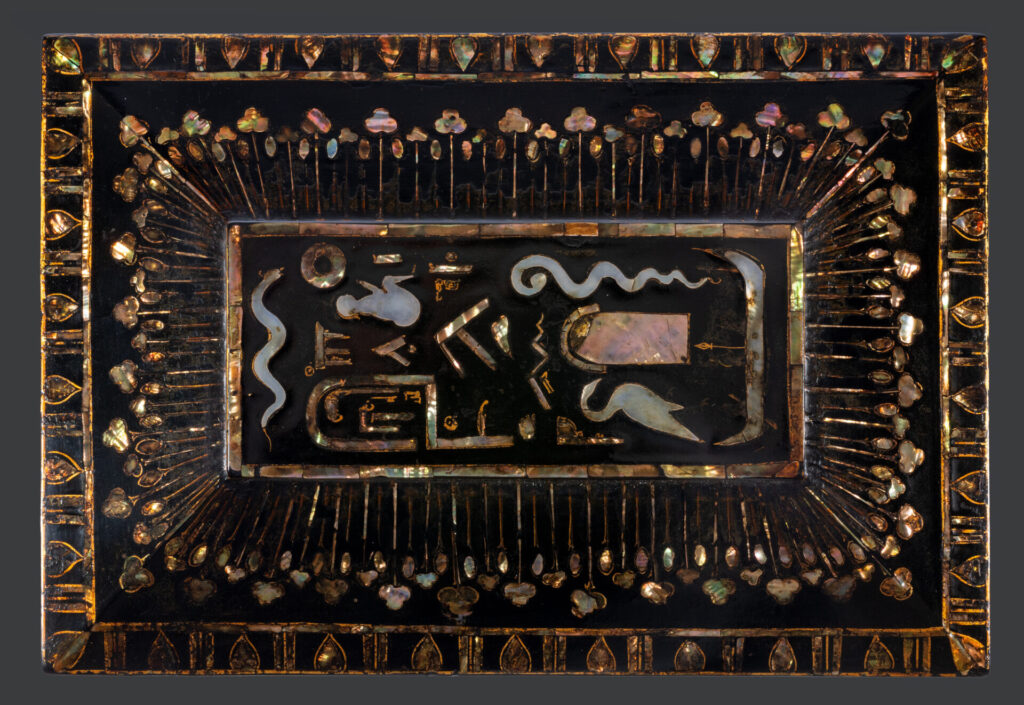 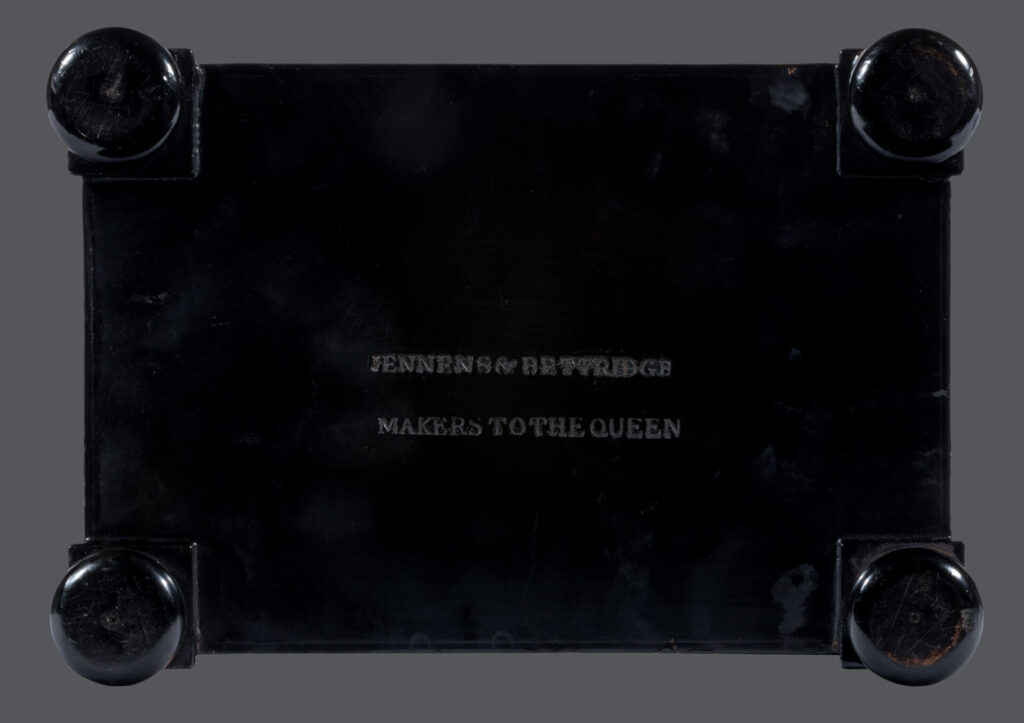 The oversized top and slanted sides below a raised centre panel are all intricately decorated and inlaid with mother of pearl Egyptian symbols, signs and shapes. The top opens to reveal the two original lids. The lids are black with gilt borders and crisply carved mother of pearl handles. The tea compartments still retain the silver paper linings. The top with an inverted bevelled edge displays upright leaf motifs flanked with mother of pearl uprights. The body is finished on all four sides with Egyptian figures, shapes, symbols, and various animals.

The tea caddy is raised on slender bun feet below right angled plinths.

This rare 19th century tea caddy is in excellent condition and is stamped with the famous makers' mark to the underside.

The firm of Theodore Hyla Jennens and John Bettridge was founded in 1816, when they took over the Birmingham workshops of Henry Clay, Japanner to George III and the Prince of Wales, at 19-21 Barr Street. By 1837 they had opened London showrooms at 2 Halkin Sreet West, Belgrave Square. Further showrooms were later established in Paris and New York.

Jennens & Bettridge specialised in the production of papier-mâché products, including tea caddies, tea trays and later larger pieces of furniture such as chairs and sofas.

In 1825 they took out a patent for ‘ornamenting papier-mâché with pearl shell’ and this technique, together with painted decoration and gilding, provided a brilliant effect because of the iridescent quality of the mother of pearl.

The quality of their work was quickly recognised and by 1825 they could claim to be ‘Japanners in Ordinary to His Majesty’. Royal Commissions were received from not only George IV, but also William IV and later Queen Victoria, for whom they produced many items.

The firm was highly regarded and the most successful and prominent of its kind. By 1851 they were the leading manufacturers of papier-mâché in England and exhibited at the Great Exhibition of 1851, where they were awarded a prize medal.

In the 1850s the firm employed sixty four men, most of them trained at the London Schools of Design.

From 1864 -70, John Bettridge continued the business alone after his partner died.

The use of papier-mâché flourished in England between the mid-18th and 19th centuries, when small domestic products, such as tea caddies, were fashionable. Victorian papier-mâché was usually made by pasting layers of paper over moulds of the required shape, which was then oiled, baked at a high temperature, varnished, and dried in a stove. Jennens & Bettridge patented various decorative techniques, such as the mother-of-pearl inlay which can be seen on this caddy. The inlay was applied before the gilt decoration, followed by a final coat of varnish, further stove drying, and polishing. 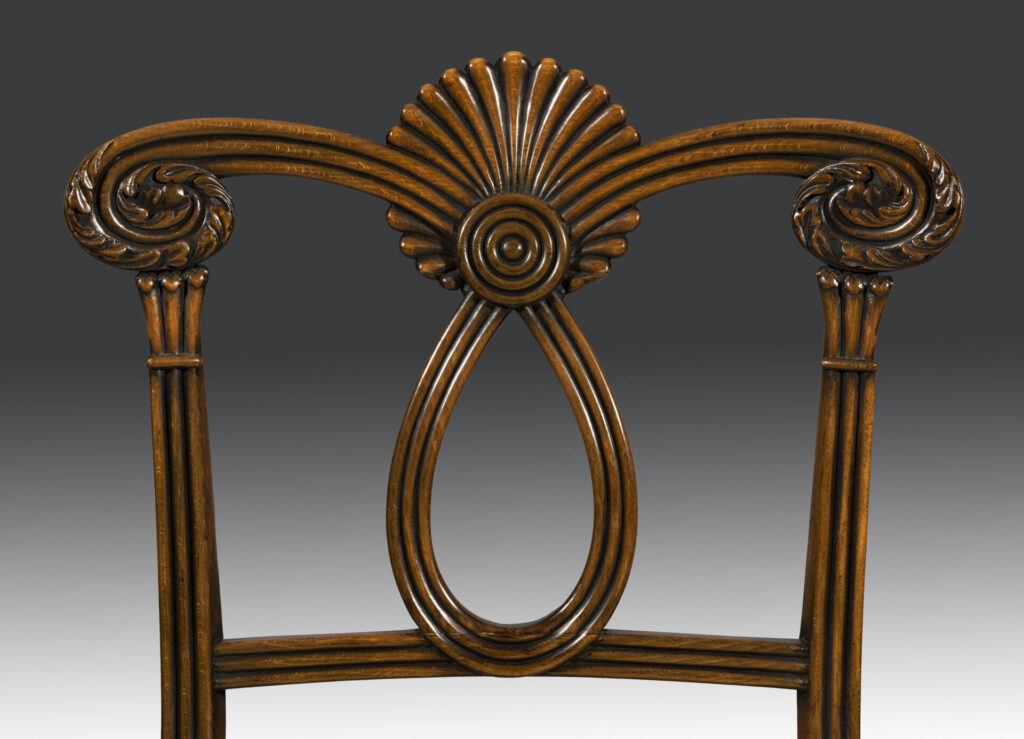 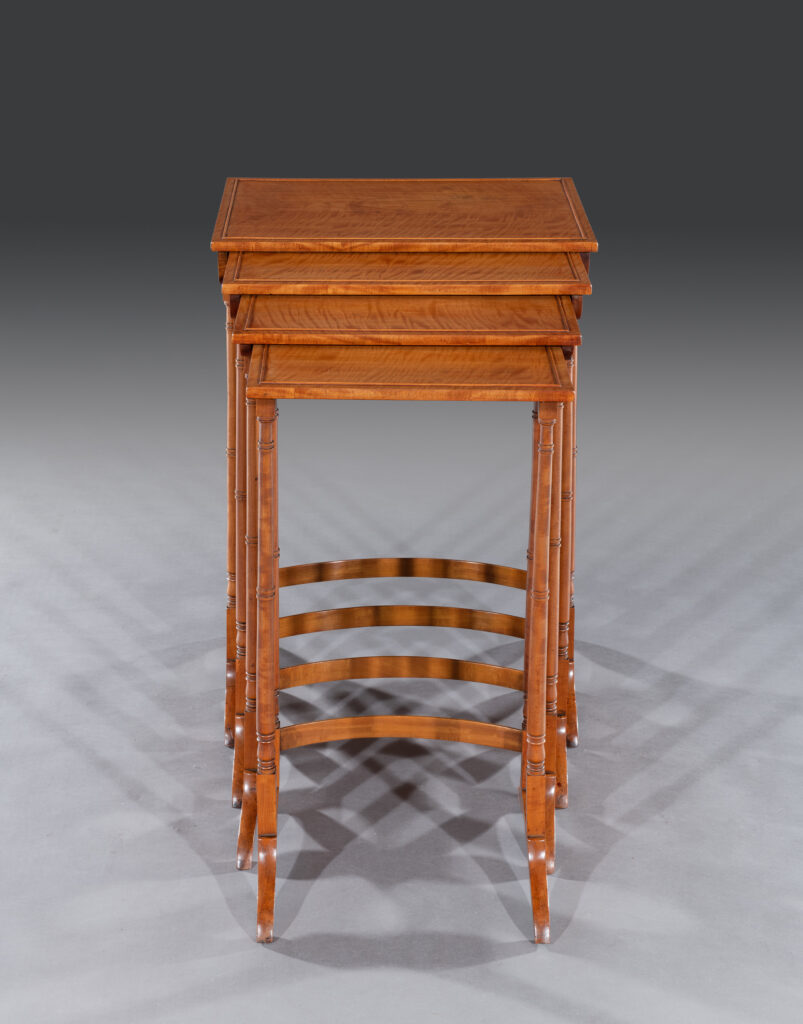 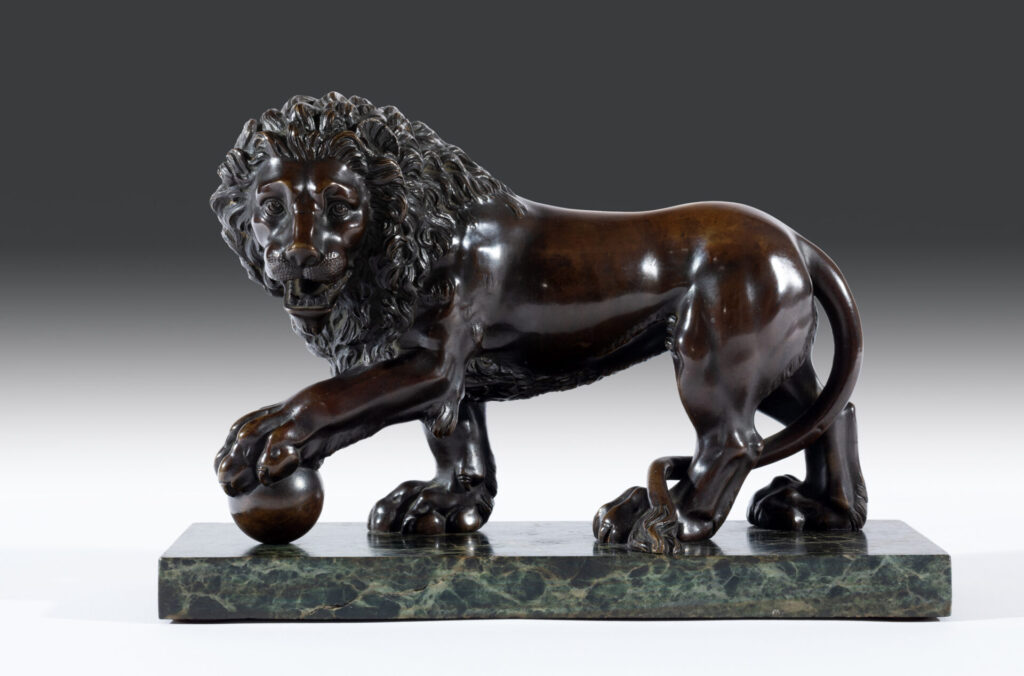 Regency Lion on Marble Base