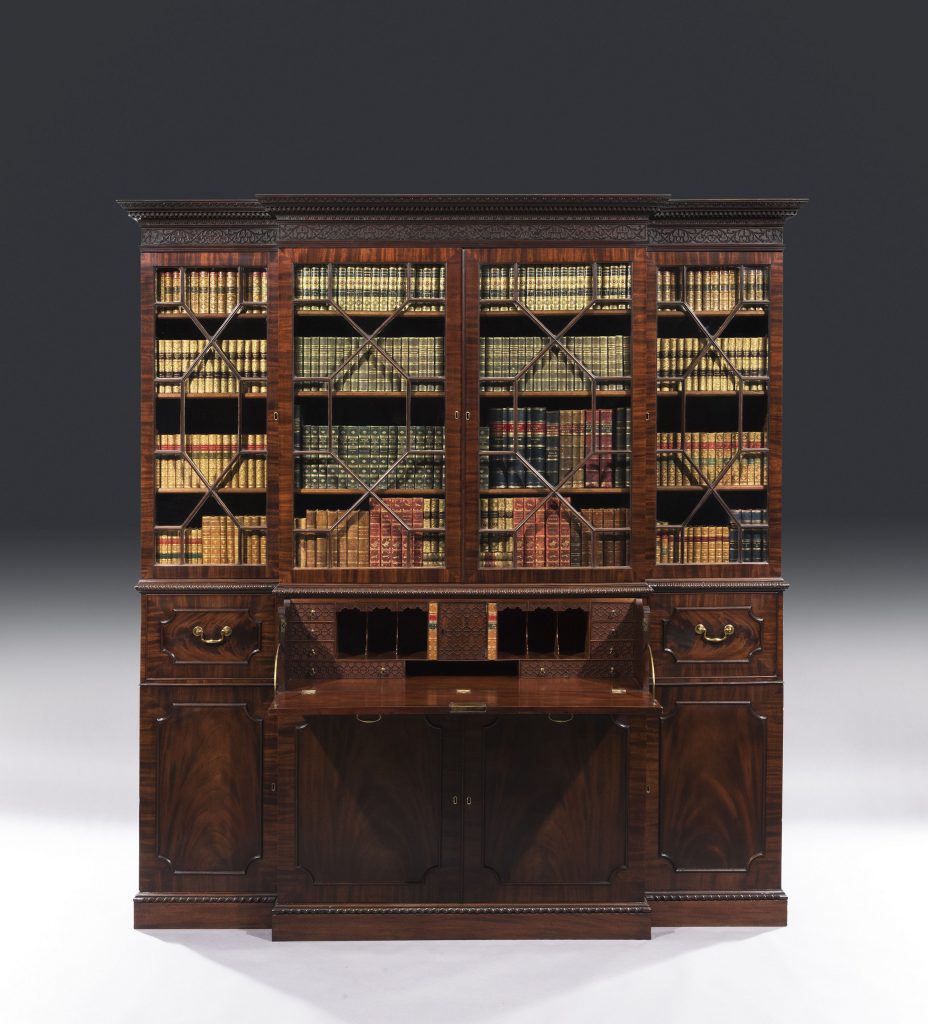 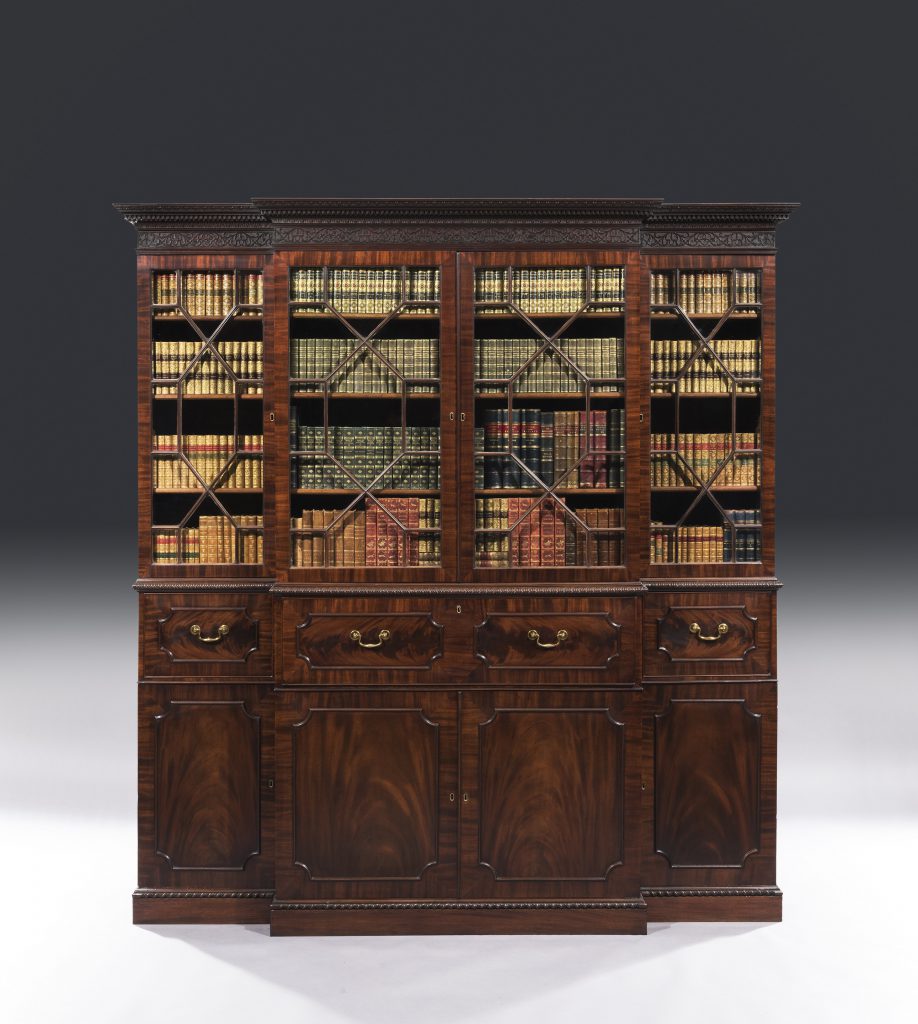 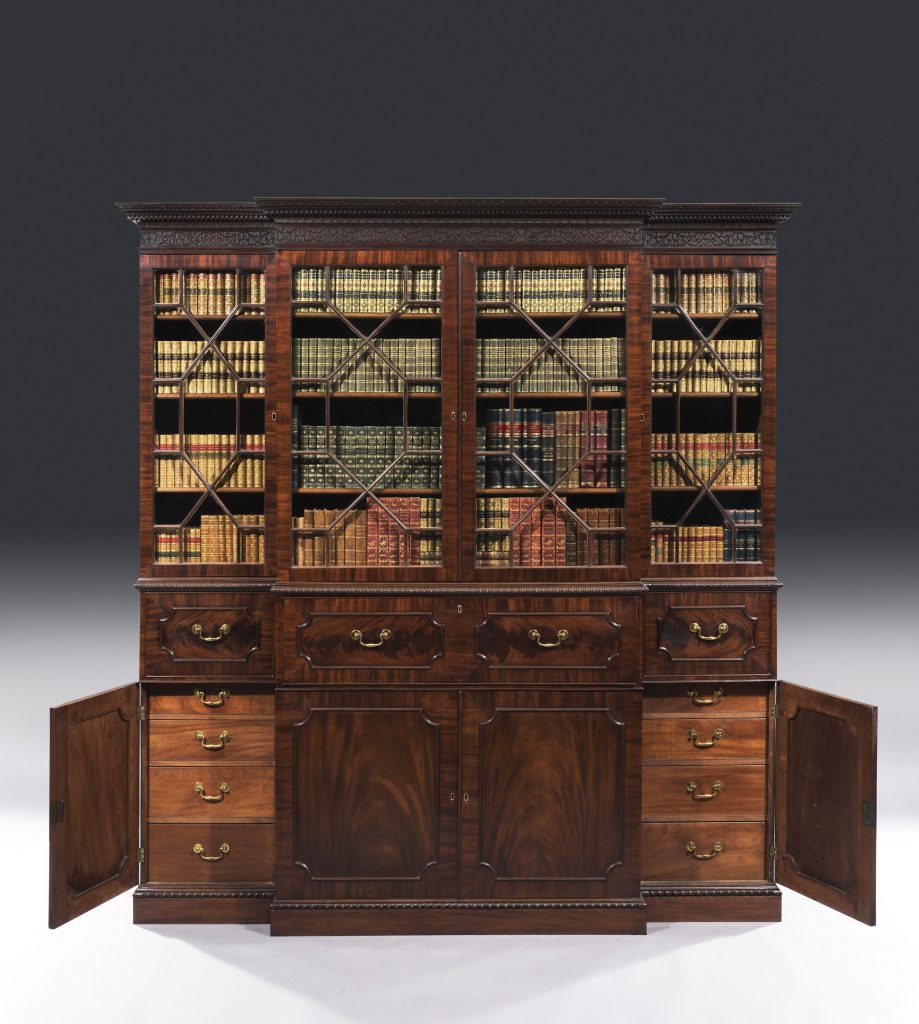 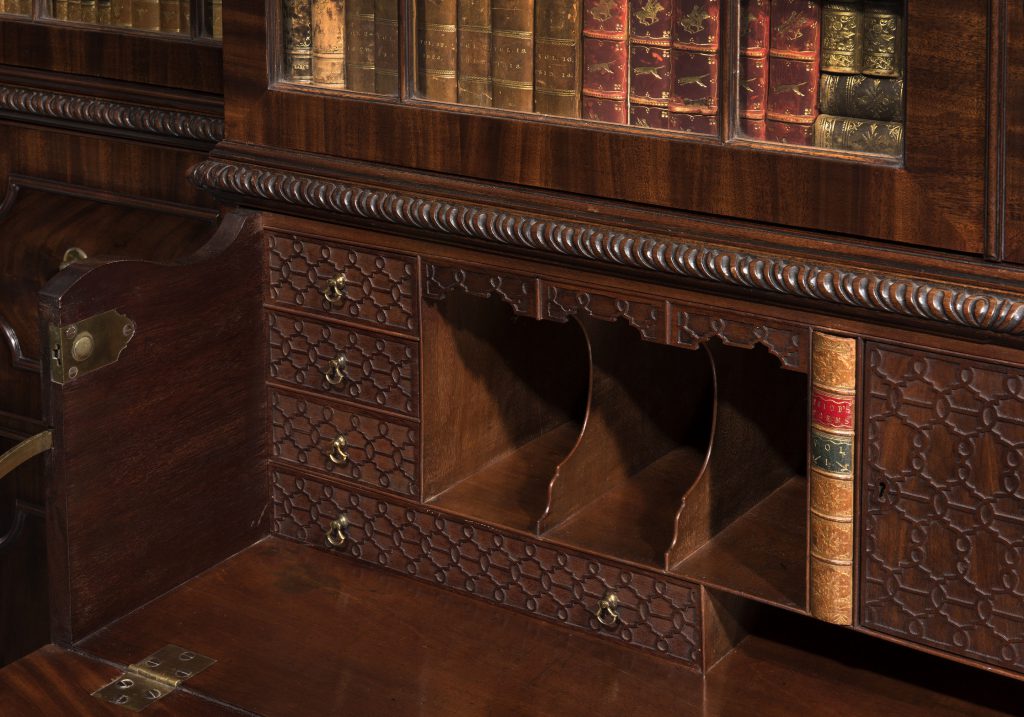 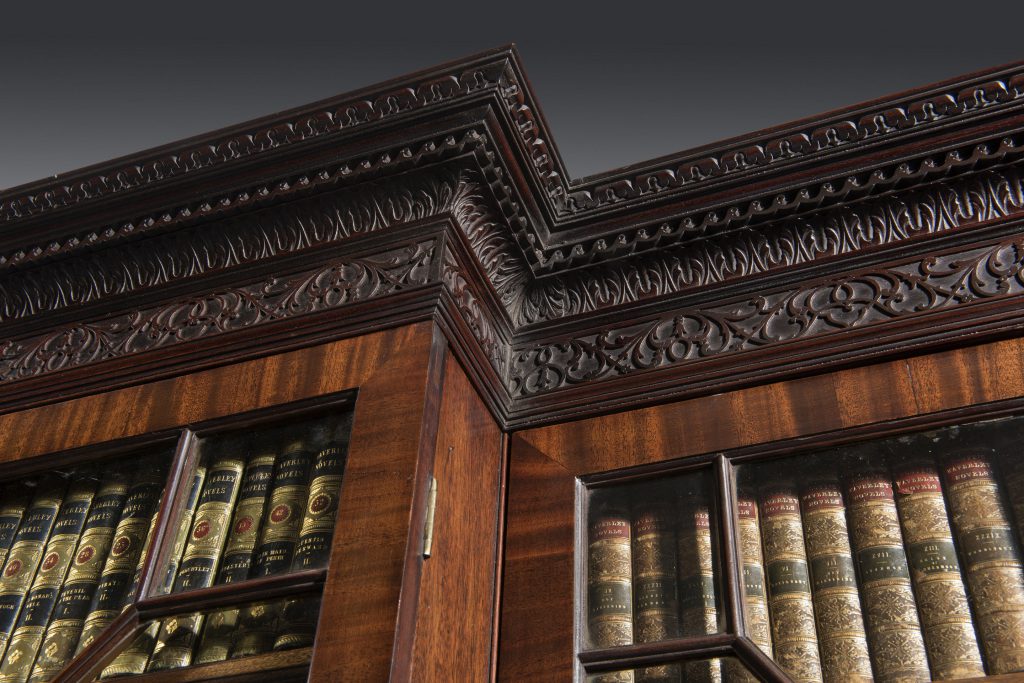 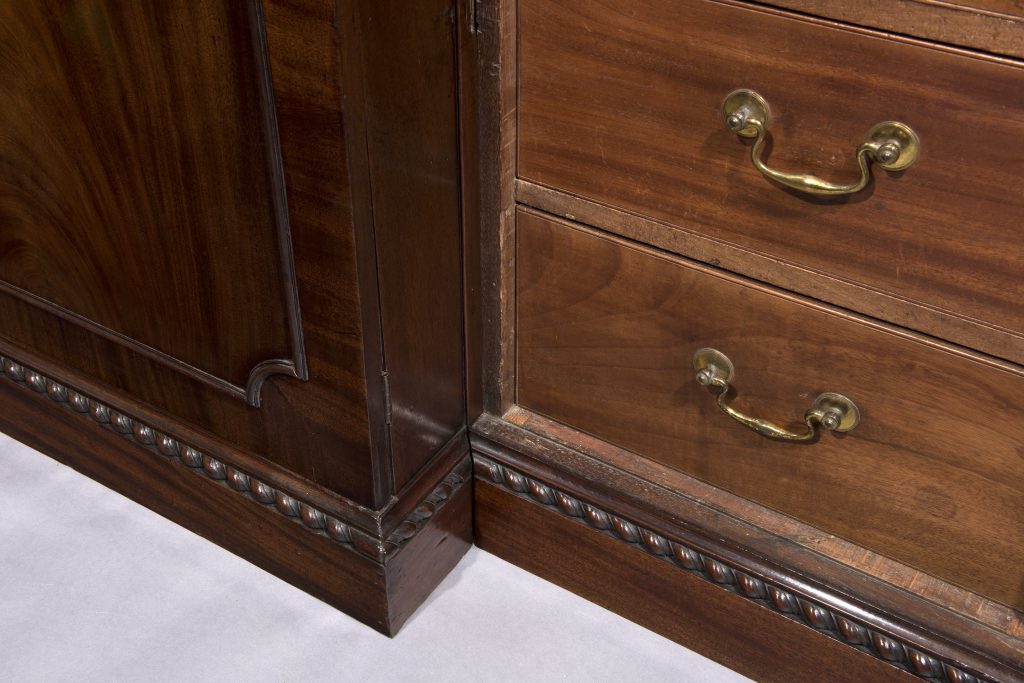 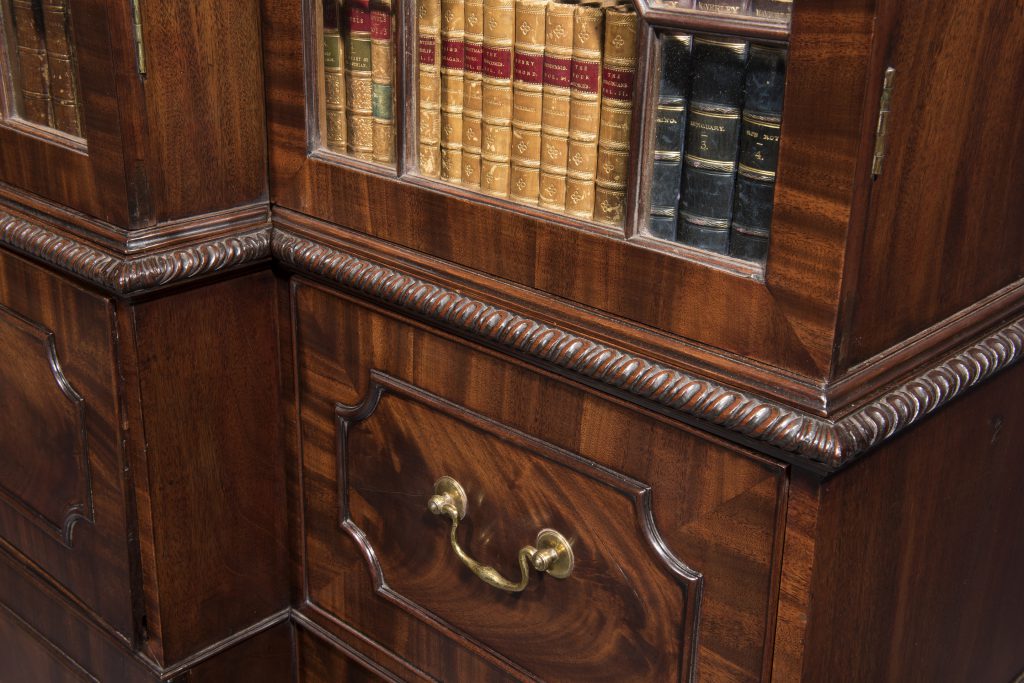 In the manner of WILLIAM KENT

The secretaire bookcase has an exceptional carved breakfront pediment which sits above astragal glazed doors that rest on a carved moulded edge with acanthus leaf decoration. The lower section with a secretaire drawer has a centre cupboard below which is fitted with trays and another full length drawer. The secretaire is flanked by drawers above panelled cupboard doors concealing banks of drawers. The bookcase rests on a crisply carved gadrooned moulded plinth base and carries the original gilt brass swan neck handles.

In our opinion the bookcase has three compelling styles which we believe can be directly related to the designs of William Kent; The pediment has a vitruvian-wave which is prevalent throughout William Kent's designs and his commissions; the leaf carved decoration on the pediment is seen on items designed by William Kent that have been made for various estates in England; the overall character of the pediment has the palladian style that William Kent is famous for.

The maker was almost certainly working in a London workshop carrying out William Kent's designs. However the moulding to the base of the bookcase closely resembles the work of cabinet maker William Hallett. This moulding is often seen in commissioned furniture for St. Giles's House, Dorset for the 4th Earl of Shaftesbury

William Hallett worked extensively for Anthony Ashley-Cooper 4th Earl of Shaftesbury (1710-1771) at St Giles House, Wimborne, Dorset. The Earl employed William Hallett, the highly fashionable cabinet maker and upholsterer of Great Newport Street, to supply chairs and dining room furniture for his house between 1745-1752. Four payments to Hallett are recorded in the St. Giles household accounts book for the years 1732-1757. William Hallett made furniture from about 1730, with work for Lord Irwin as his first recorded commission (1735), until the early 1750s.

William Hallett acted as ‘sleeping partners’ in the firm Vile & Cobb. This is attested by payments and receipts in the Hallett, Vile & Cobb bank accounts, Drummonds Branch. In 1753 William Hallett moved his business from Great Newport Street to St. Martin’s Lane. He took premises next to Vile & Cobb’s. Two years later his name is crossed through in the rate books (Westminster Reference Library) and Cobb’s is inserted.

William Hallett was commissioned by many of the landed gentry of the day and his work can be seen at some of the houses listed below.

John Leech worked at The Gazette & Herald for 45 years as a journalist and lived in Devizes all his life. He was a member of the Devizes Amateur Dramatic Society and the productions he got involved with were of the farcical variety.

Mr Leech’s roots in Devizes ran deep. His father and grandfather were medical superintendents of Wiltshire’s lunatic asylum now Roundabout Hospital. Mr Leech was brought up on the hospital site and wrote two books about it, ‘The Lunatic Years’ and ‘Inside Out’. He took a job as cub reporter on the Gazette in 1949 at the age of 19 after he was turned down for military service on health grounds. He would regularly cover proceedings at Devizes Assize Court. Mr Leech retired in 1995 and died at the age of 92.