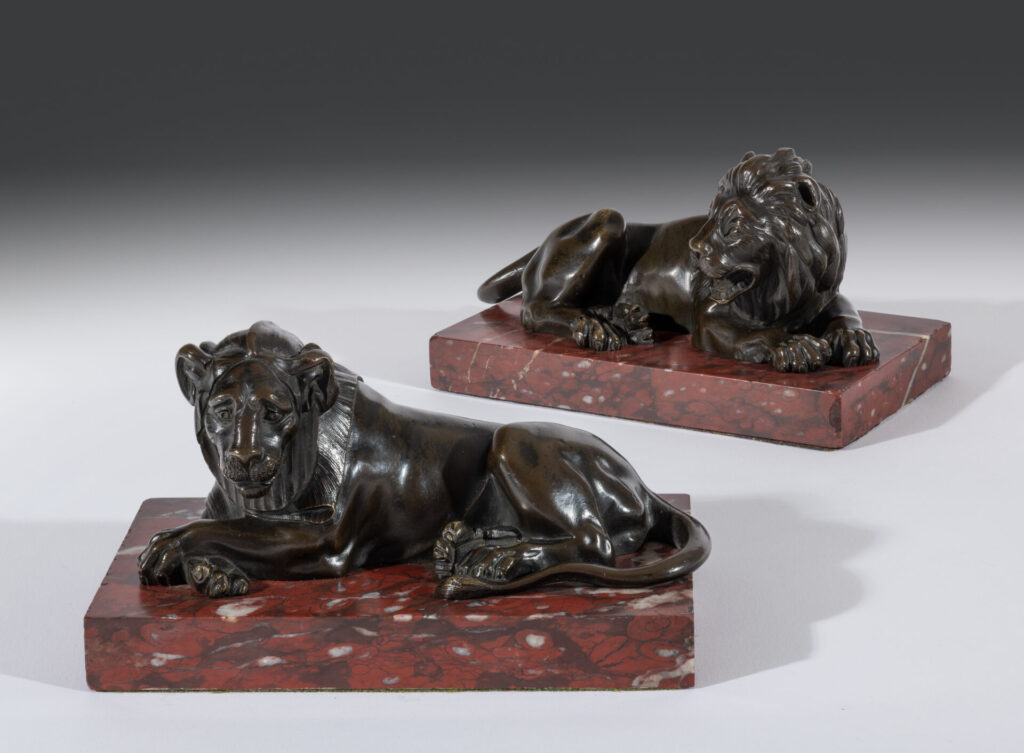 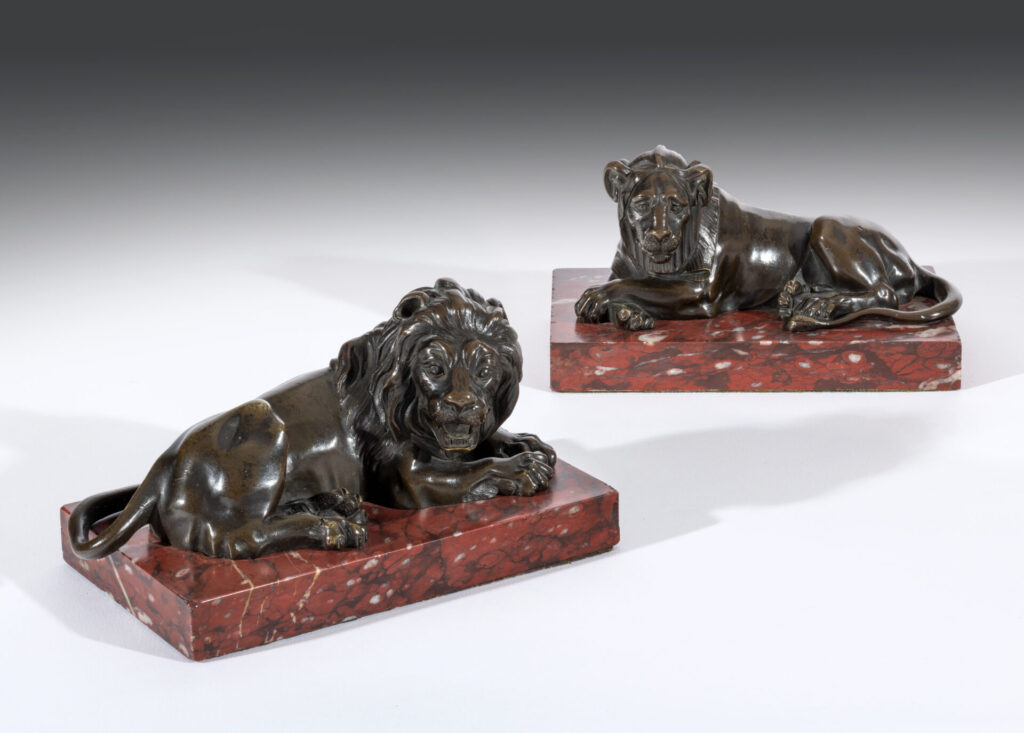 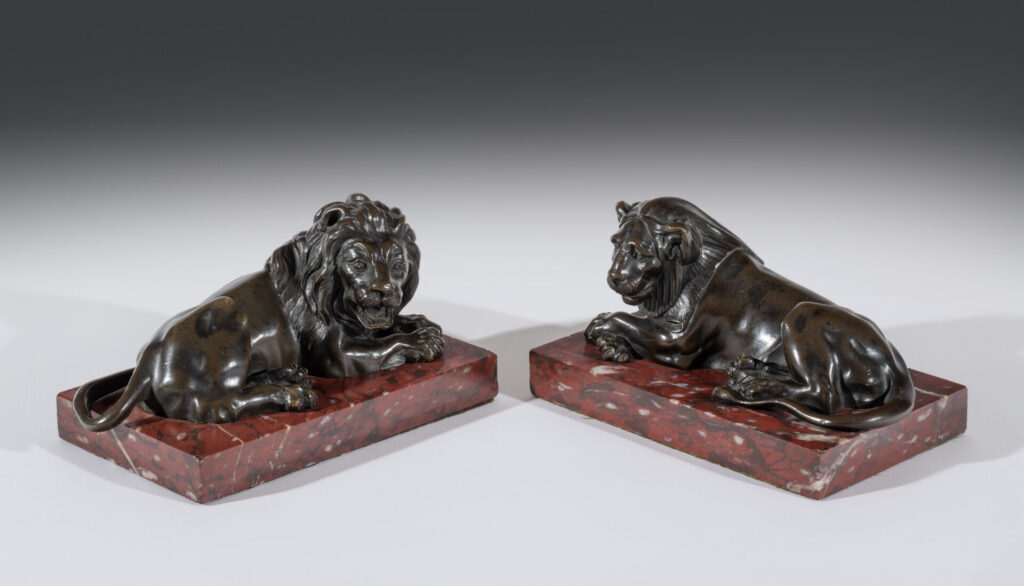 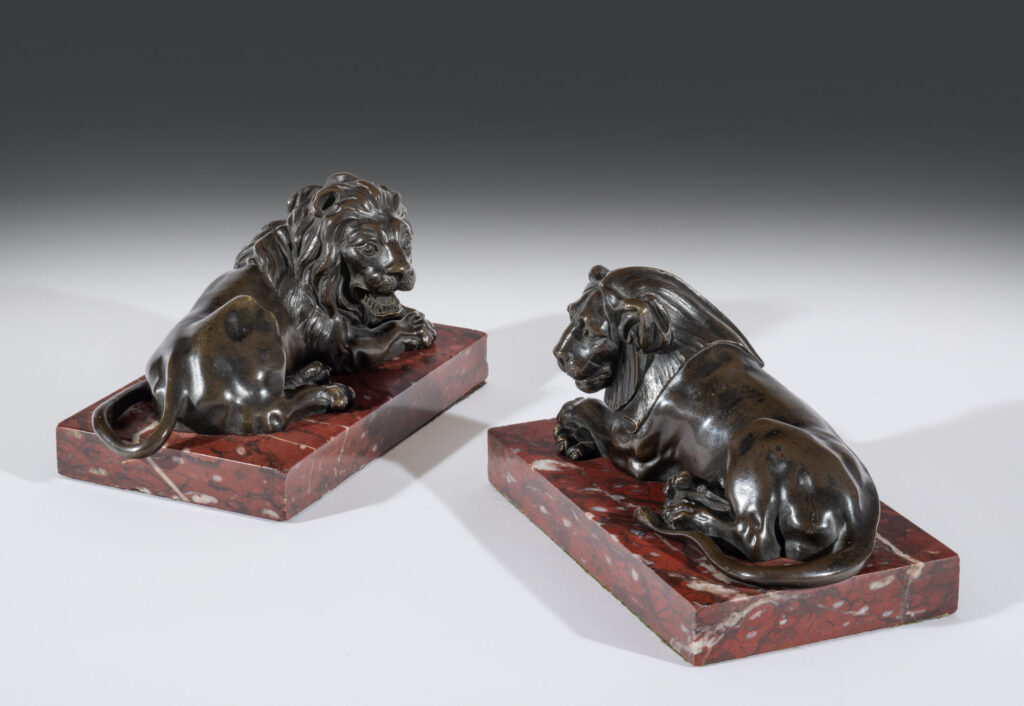 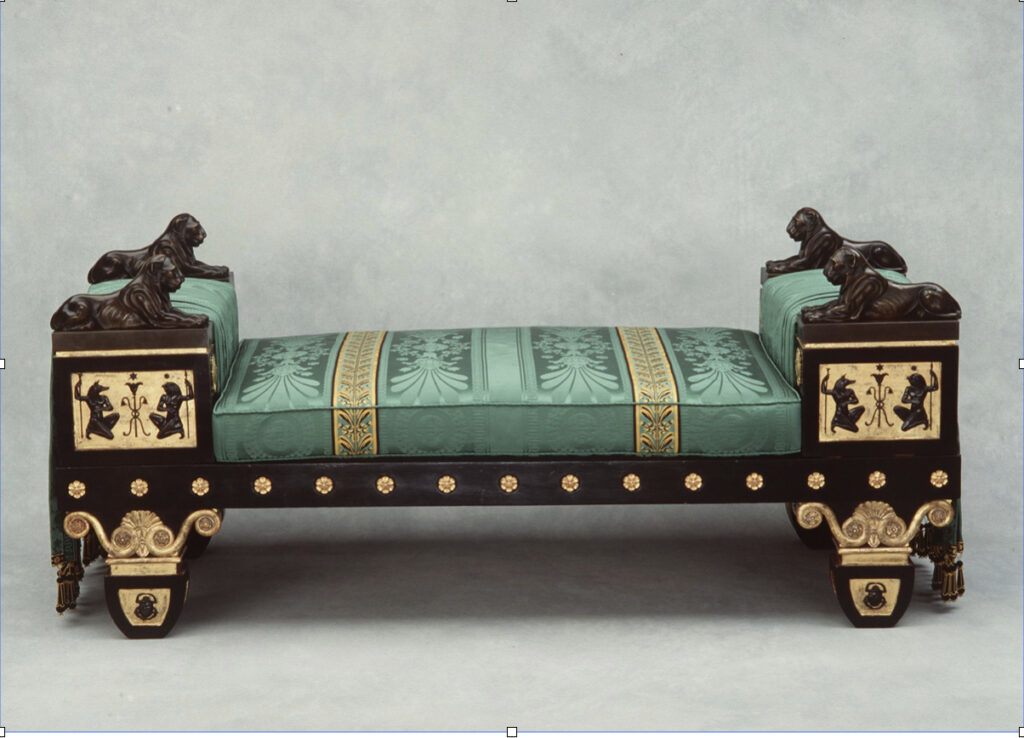 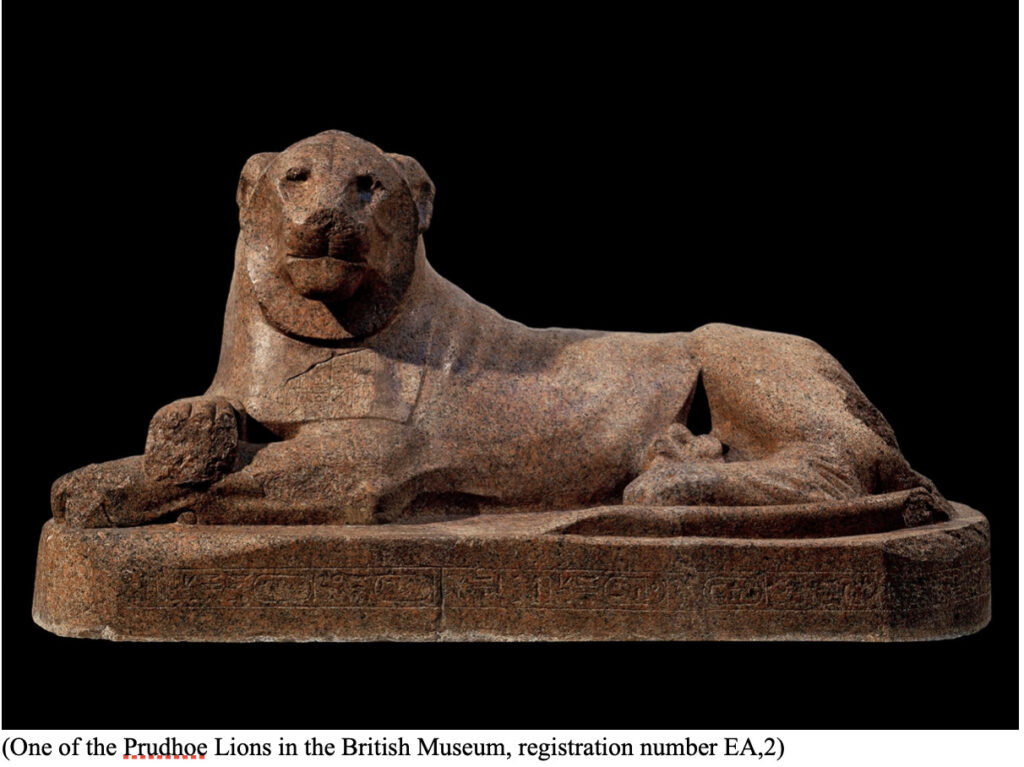 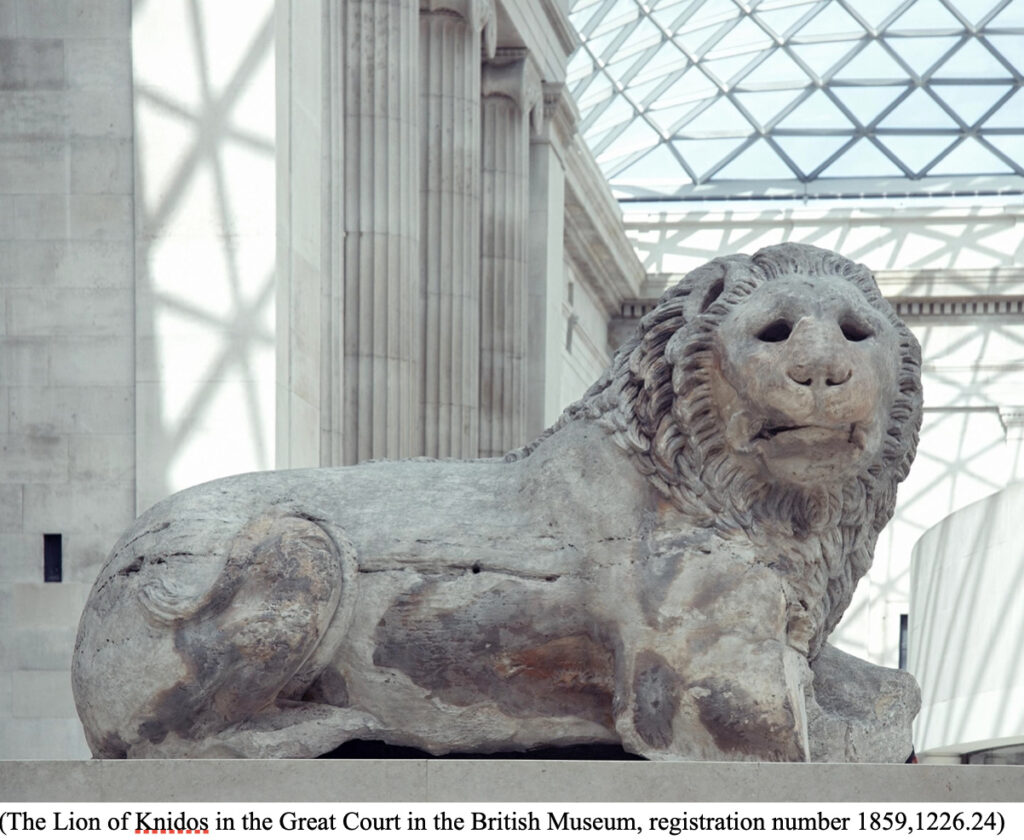 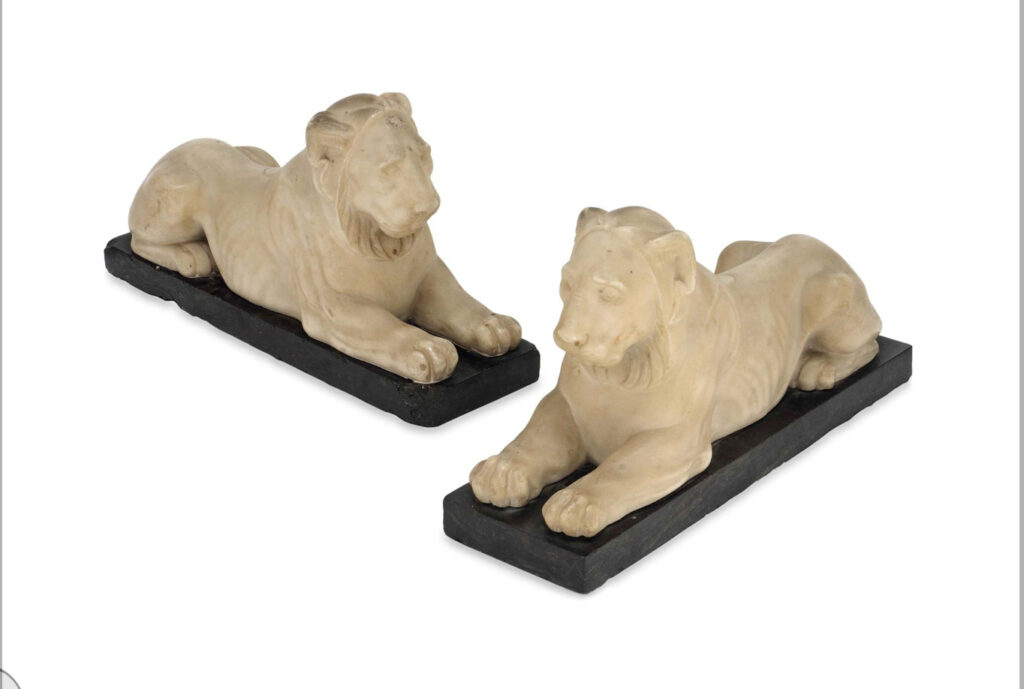 This fine pair of lions would have been designed to appeal to a connoisseur of the Regency period, familiar with the latest archaeological discoveries and with an interest in the antique.

The major difference between the neo-classicists of this period, as opposed to the 18th century equivalent, is that the Regency period connoisseurs were more interested in ancient Greek classicism rather than the Roman taste which informed much of the work of Robert Adam and his contemporaries. Foremost amongst all of the 19th century connoisseurs was the banker and taste-maker Thomas Hope whose homes at Duchess Street in London and Deepdene in Surrey, and the images of them that he circulated in his publications, were designed to promote the new taste to his circle of wealthy friends and admirers. Hope patronised the French emigré bronzier Alexis Decaix who was 'the only man in England capable of realising his designs' according to Hope.

One of the most recognisable of all of Hope's motifs is the symbol of the Egyptian lion which he used most famously on the daybed made for his Duchess Street home circa 1802 and now in the Powerhouse Museum in Australia.

Our pair of lions take their inspiration from the classical models that influenced Hope but do not slavishly copy his stylised version of the design.

One of our pair is clearly based, like Hope's lion, on an ancient Egyptian original. The lioness is a well-known Egyptian form, usually seen as guardian statues outside important Egyptian buildings and tombs. Two wonderful examples, known as the Prudhoe Lions, were acquired by the British Museum in 1835. Numerous examples of this form of Egyptian lion survive in all of the major museum collections in Europe and America, as well as those still in Egypt itself and the iconography of this form of lion was very influential during the Regency period.

The second of our lions is based on a later, though still ancient, Hellenistic Greek form of lion. The British Museum has an exceptional example, known as the Lion of Knidos acquired in 1859. Once again, there are other examples of this form of lion in major museum collections and it is a very different sort of lion to that seen in Rome and popularised once more in the 18th century by the likes of Canova.

Taken together, our pair of lions show the allied interests in the period in ancient Greek and Egyptian art and the way that the motifs from that period could be combined to achieve a 'true classicism' and not the 'fake' classicism promoted in the late 18th century by Adam and his followers.

The original owner of these pieces would have been someone of taste and likely an educated follower of fashion and they would enhance any collection today in just the same way as they would have done some 200 years ago.

The image shown above is of a pair of lions sitting on black marble plinths after a model by Thomas Hope were sold by Christies on the 20th of May 2014, lot 25. 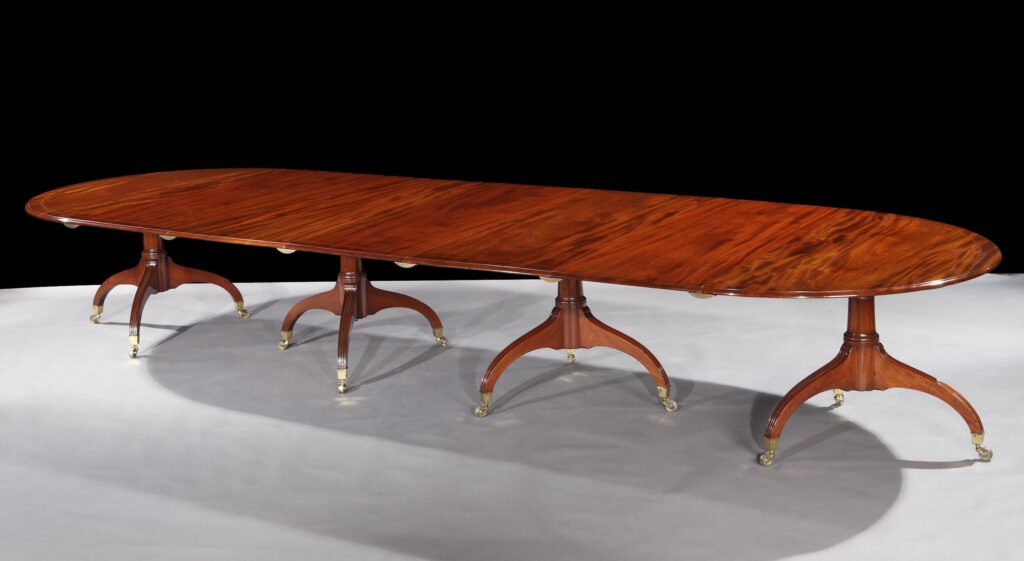 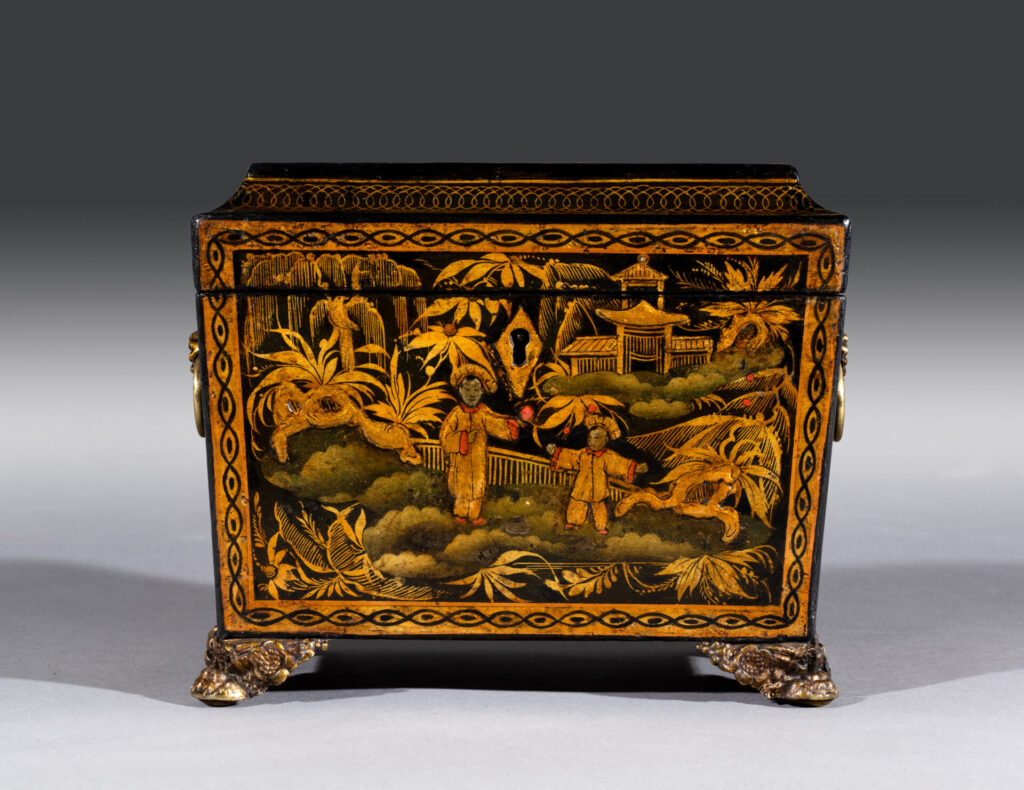 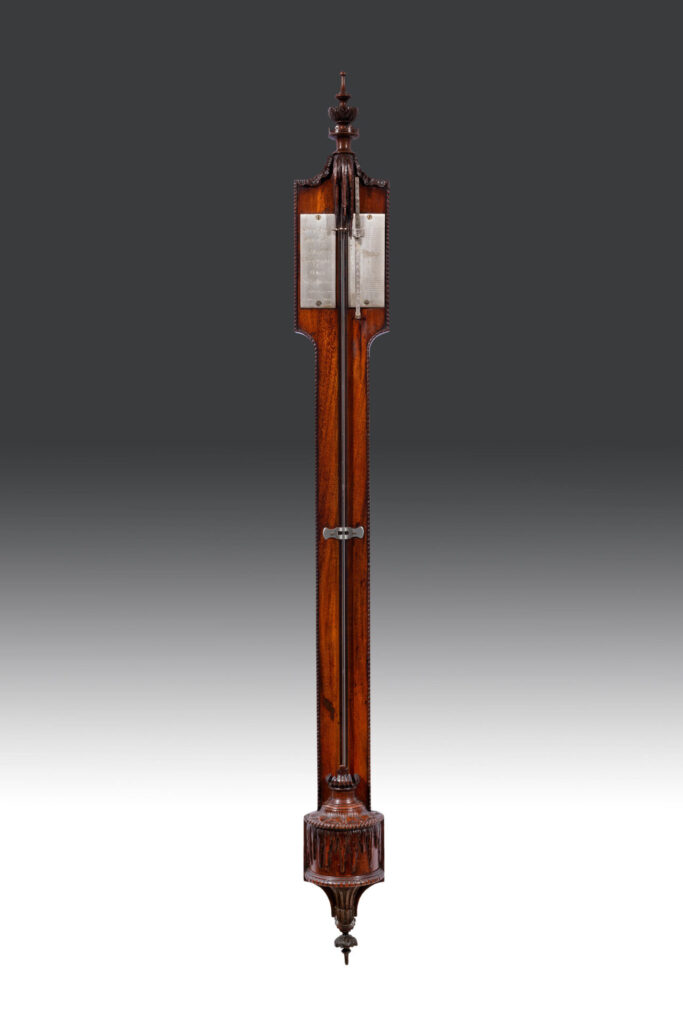