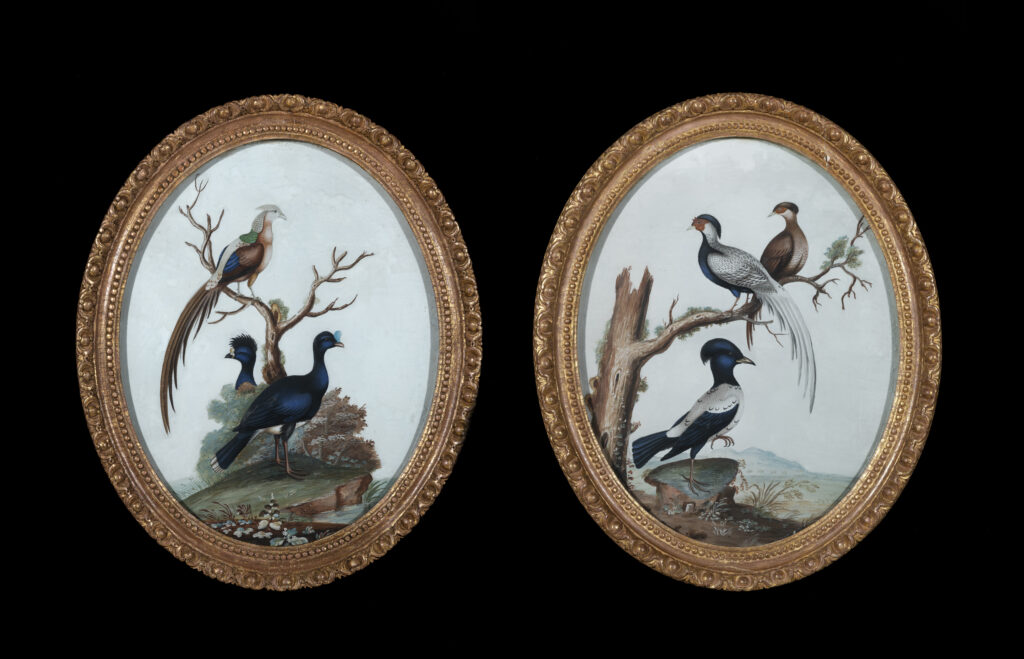 A pair of 18th century George III embossed bird pictures attributed to Isaac Spackman.
These pictures, which would appear to be in their original frames, are numbered 2 and 6. The different birds seen in each of the pictures are taken from original prints by George Edwards and may be seen in signed examples by Isaac Spackman. One painting illustrating a golden crested pheasant and cranes, the other with a white Chinese pheasant hen and cock with a smaller blue ouzel.

George Edwards (1694 - 1773) was born at Stamford, Essex and was educated at public school in Leytonstone, later being apprenticed to a tradesman in London. Having access to a large library of scientific books Edwards studied these assiduously and, having made up his mind not to enter business, decided to travel abroad. Between 1716 and 1733 he visited many foreign countries but in December of the latter year settled down in London and, through the influence of Sir Hans Sloane, was chosen Librarian to the Royal College of Physicians. Almost immediately he commenced the preparation of a series of coloured drawings of animals and birds used in his A Natural History of Uncommon Birds, published 1743 - 53, and subsequent publications. He was awarded the Gold Medal of the Royal Society and later elected a Fellow. Such was the impact of Natural History that Edwards is considered to have almost single-handedly popularized the art of bird and animal illustration, and is thus known as “The Father of British Ornithology.”
Edwards publication provided the source material for Samuel Dixon's first set of 'Foreign Birds', issued in 1750 and subsequent works by Isaac Spackman.
Isaac Spackman (fl. c.1750-71) was perhaps the most accomplished and prolific of artists who specialised in bird pictures. Described after his death by Horace Walpole as a painter of birds, of Islington, London, he also worked in watercolour on vellum. Spackman produced his first set of twelve bird pictures in 1754, and further sets in 1764 and 1769, the earlier sets relating closely to those of Dixon, and in turn to George Edwards' original illustrations.