Medici Lion on Marble Base 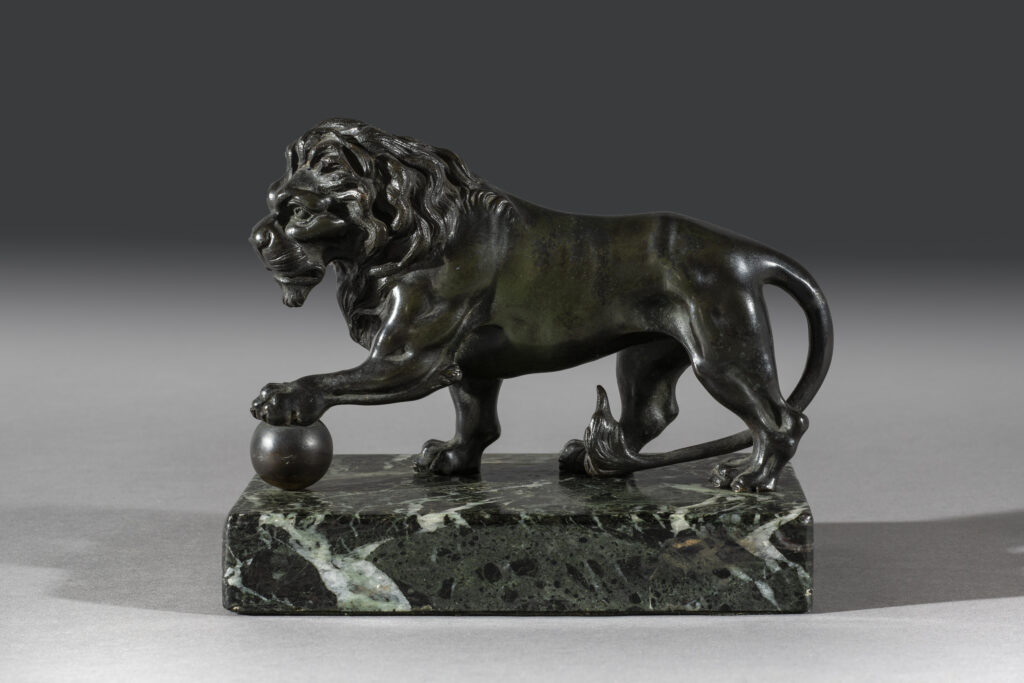 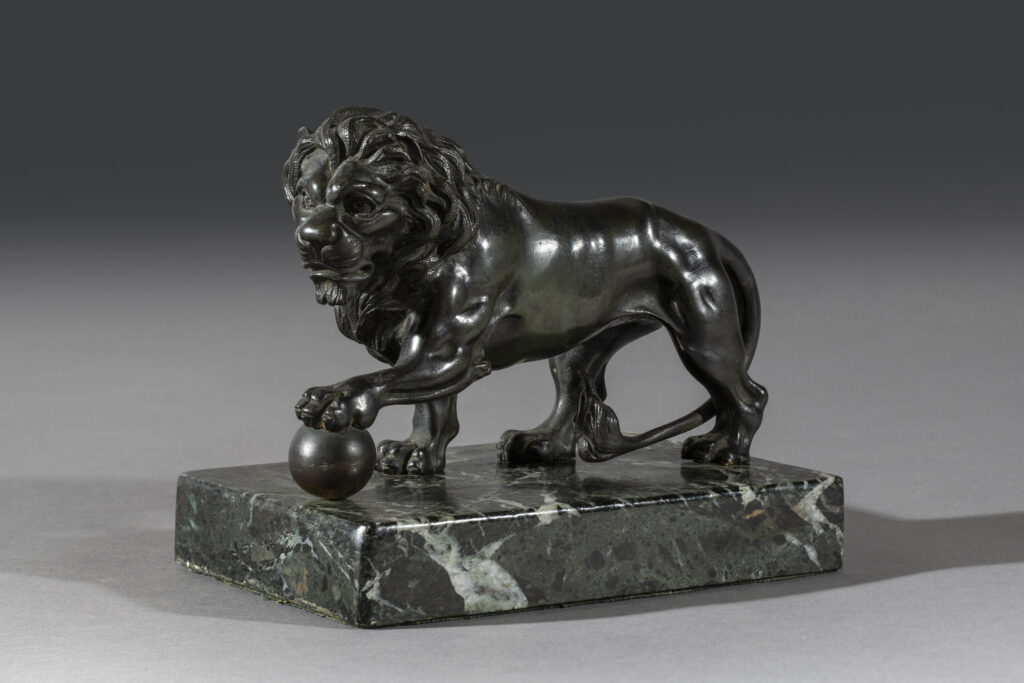 Home » Medici Lion on Marble Base

Medici Lion on Marble Base

The Medici lion is superbly cast and is of high quality.

The lion stands on a plinth marble base is actually a 'Maurin Green' marble or 'Alps Green'.

The Medici lions are a pair of marble sculptures of lions, one of which is Roman, dating back to the 2nd century AD, and the other a 16th-century pendant; both were by 1598 placed at the Villa Medici, Rome. Since 1789 they have been displayed at the Loggia dei Lanzi, Piazza della Signora, in Florence.
The sculptures depict standing male lions, with a sphere or ball under one paw, looking to the side.
Copies of the Medici lions have been made and publicly installed in over 30 other locations, and smaller versions made in a variety of media; Medici lion has become the term for the type.
There is also a smaller bronze left-looking sculpture attributed to Italian sculptor Pietro da Barga of the same period.
A similar Roman lion sculpture, of the 1st century AD, is known as the Albani lion, and is now in the Louvre. Here, the stone used for the ball is different from the basalt body. Both may derive from a Hellenistic original.
History observes that a pair of lions was required by Ferdinando I de Medici, Grand Duke of Tuscany, who had acquired the Villa Medici in 1576, to serve as majestic ornaments for the villa's garden staircase, the Loggia dei Leoni.
The first lion originates from a 2nd century marble that was first mentioned in 1594, by the sculptor Flaminio Vacca, by which time it was already in the collection of Ferdinando. Vacca reported that it had been found in the via Prenestina, outside Porta San Lorenzo. According to Vacca, the lion had been a relief, which was carved free of its background and reworked by ‘Giovanni Sciarano’ or Giovanni di Scherano Fancelli, of whom little is now known.
The second was made and signed by Vacca, also in marble, as a pendant (part of a pair) to the ancient sculpture at a date variously reported as between 1594 and 1598 or between 1570 and 1590. The pair were in place at the Loggia dei Leoni in 1598. The pendant was made from a capital that had come from the Temple of Jupiter Optimus Maximus.
The Villa Medici was inherited by the house of Lorraine in 1737, and in 1787 the lions were moved to Florence, and since 1789 they flank the steps to the Loggia dei Lanzi at the Piazza della Signoria.
The sculptures were replaced by copies at the Villa Medici when Napoleon relocated the French Academy in Rome to the villa in 1803. These copies were made by the French sculptor Augustin Pajou.
Here in Bath, two lions of artificial stone, originally bronzed, with one or their forepaws on a gilt sphere, modelled after the Medici Lions, are placed on the gates at the south eastern end of Royal Avenue. A lion is featured on the City of Bath Coat of Arms, which represents the crowning of King Edgar, the first king of all England, in Bath in 973.
The Medicis were a renowned Italian banking and political dynasty that first began to gather prominence in Florence in the early 15th century. Their wealth and influence were initially derived from the textile trade. They dominated the city's government and were able to bring Florence under their family's power. They created an environment in which art and humanism flourished. They were patrons of Brunelleschi, Botticelli, Leonardo da Vinci, Michelangelo, Raphael, Machiavelli, Galileo and Francesco Redi among many others in the arts and sciences.