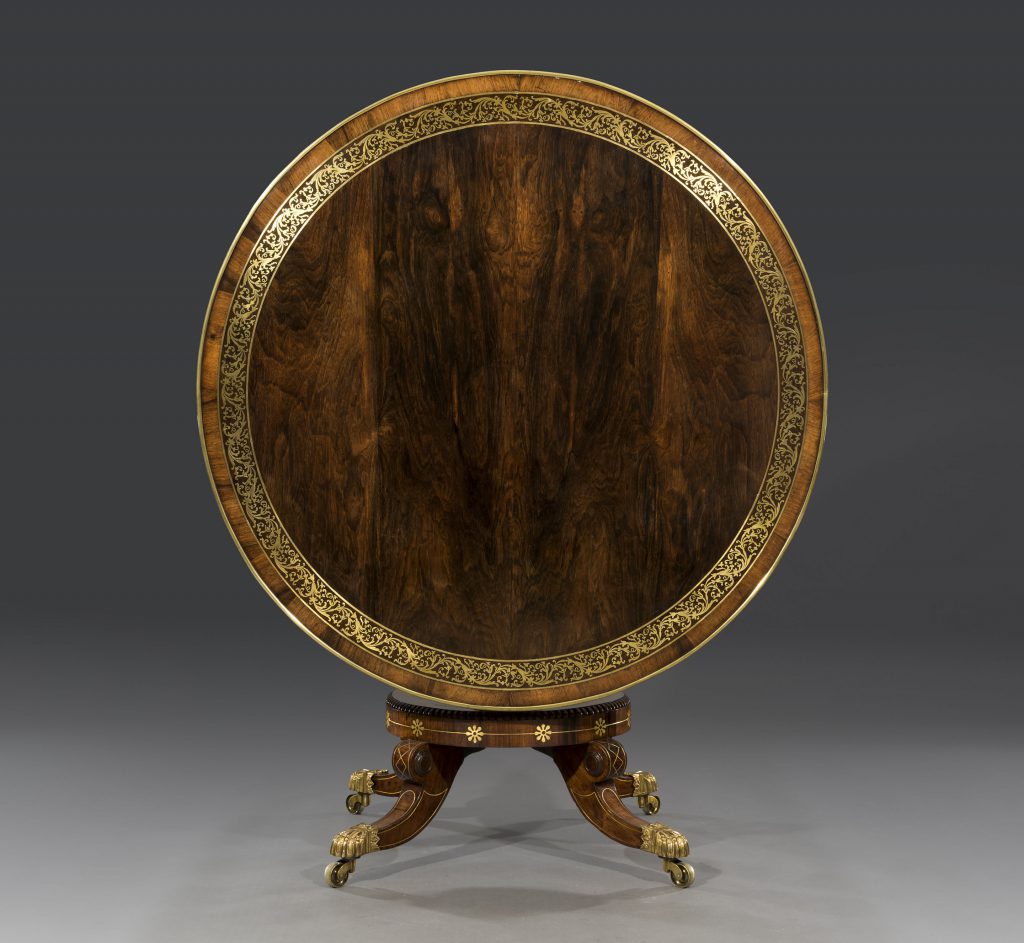 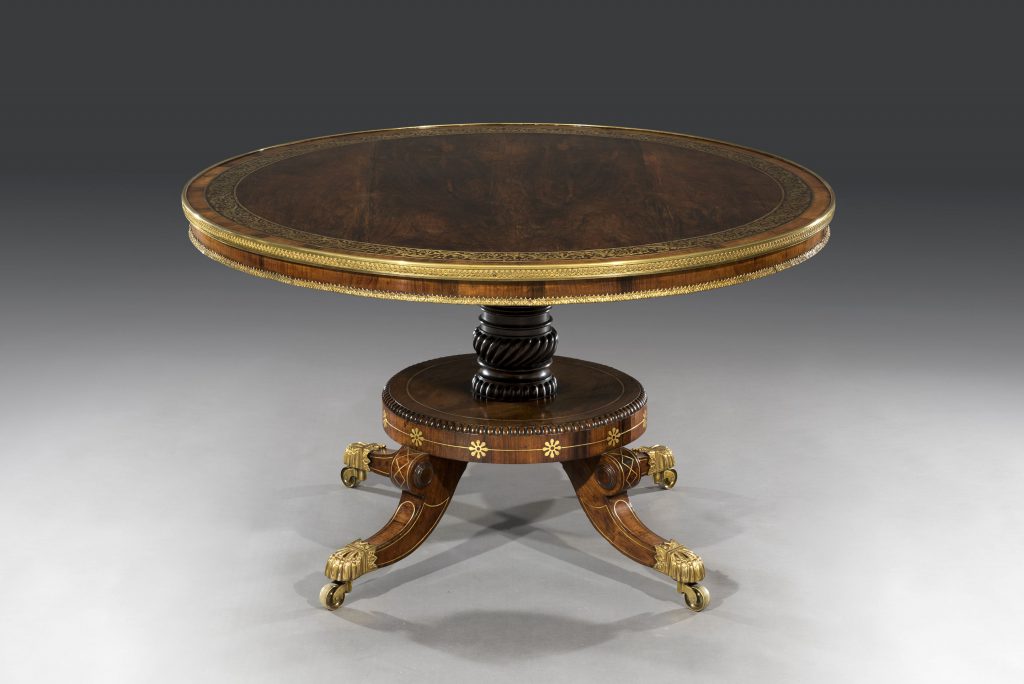 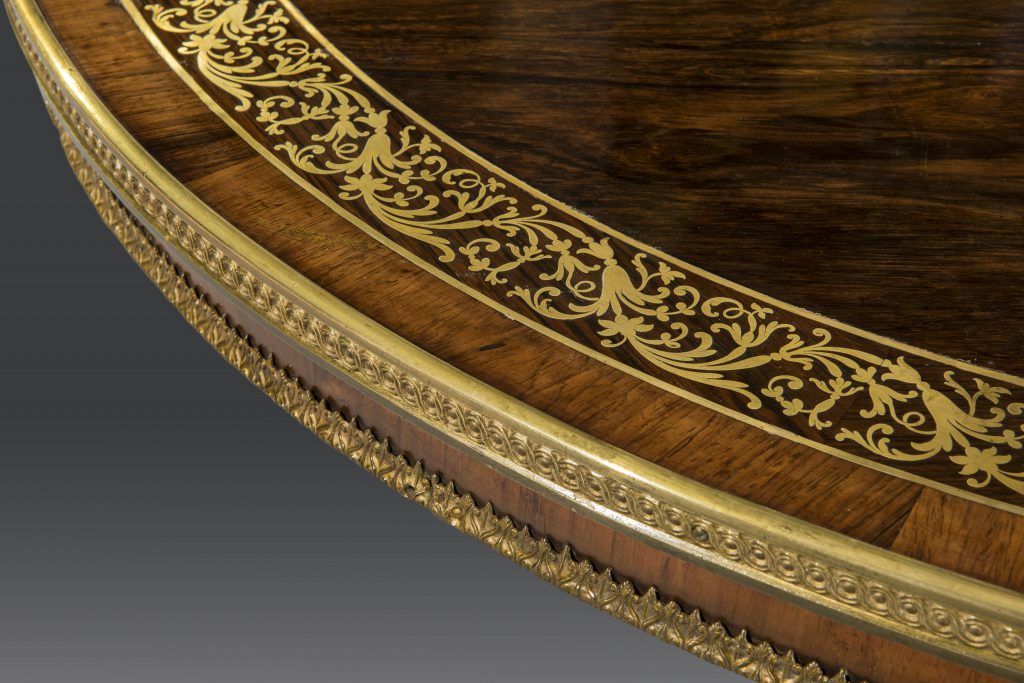 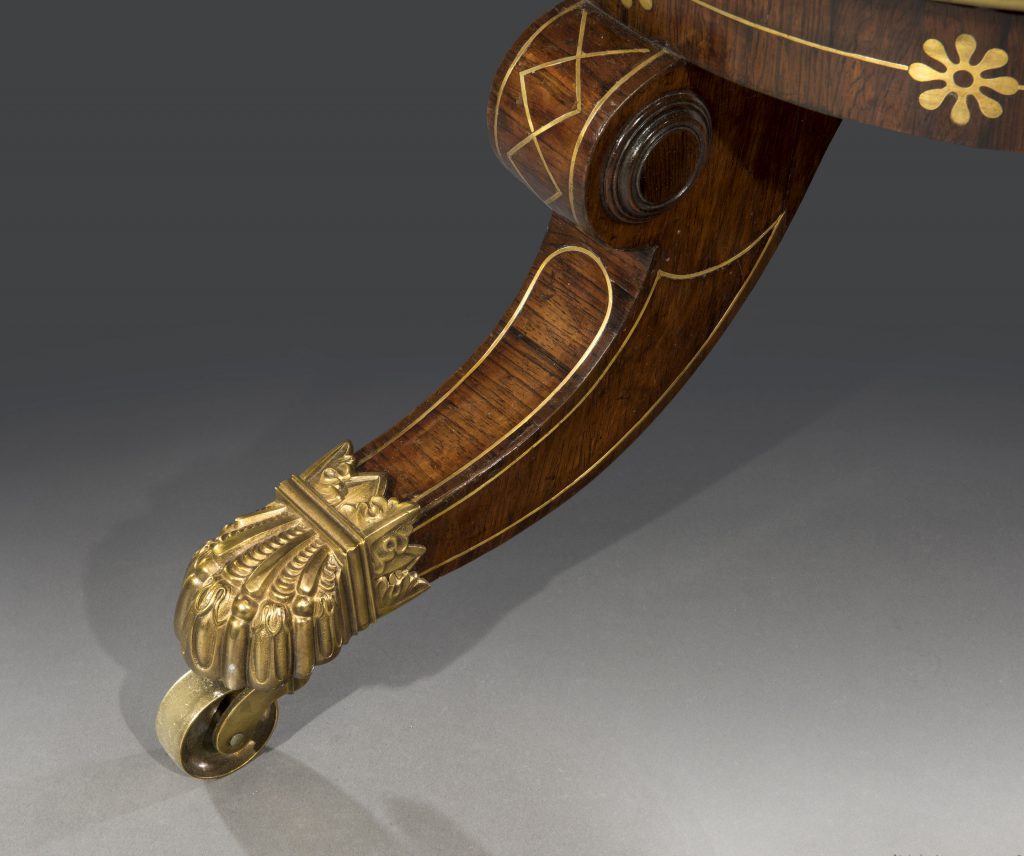 Attributed to George Oakley of London

An exceptional early 19th century rosewood brass inlaid and ormolu mounted centre table.
The book-matched rosewood circular veneered top is intricately inlaid in brass with rosewood crossbanding and gilt brass moulding with a neo-classical motif to the top edge and a gilt brass trim to the bottom edge of the shallow rosewood frieze. The table stands on a central pedestal with four brass inlaid out-swept legs terminating on profusely cast gilt brass and ormolu castors.


This style of table was originally referred to as a Loo table. These tables were designed specifically for the round game of cards known originally as ‘lanterloo’, which came into favour in England in the late 18th Century, but were also put to general use. They were centre tables, usually in circular form and of substantial, but convenient size.
Ref. ‘Regency Furniture’ by Margaret Jourdain Pg. 73 Fig.162

George Oakley (d. 1841)
George Oakley was among the foremost cabinet-makers of his day, with premises in Bond Street, London, and the city. He had a wide and distinguished circle of patrons, including the Prince Regent, for whom he worked on Carlton House. He supplied furniture for the Mansion House and the Bank of England, as well as private clients such as the banker Thomas Baring, Edward, Lord Lascelles, for whom he worked at Harewood House, Hanover Square, London, and many, many more including Sir Henry and Sir John Sutton Nelthorpe, the 7th and 8th Barons of Scawby Hall.

Oakley was granted a Royal warrant in 1799 after receiving a visit from Queen Charlotte and other members of the Royal family, upon which ‘ …… her Majesty, The Duke and Duchess of York, and the Princesses & c., highly approved of the splendid variety which has justly attracted the notice of the fashionable world’ (Morning Chronicle, May 1799).
He enjoyed a long and successful career, stretching from 1789-1819, specialising in French and Grecian style furniture