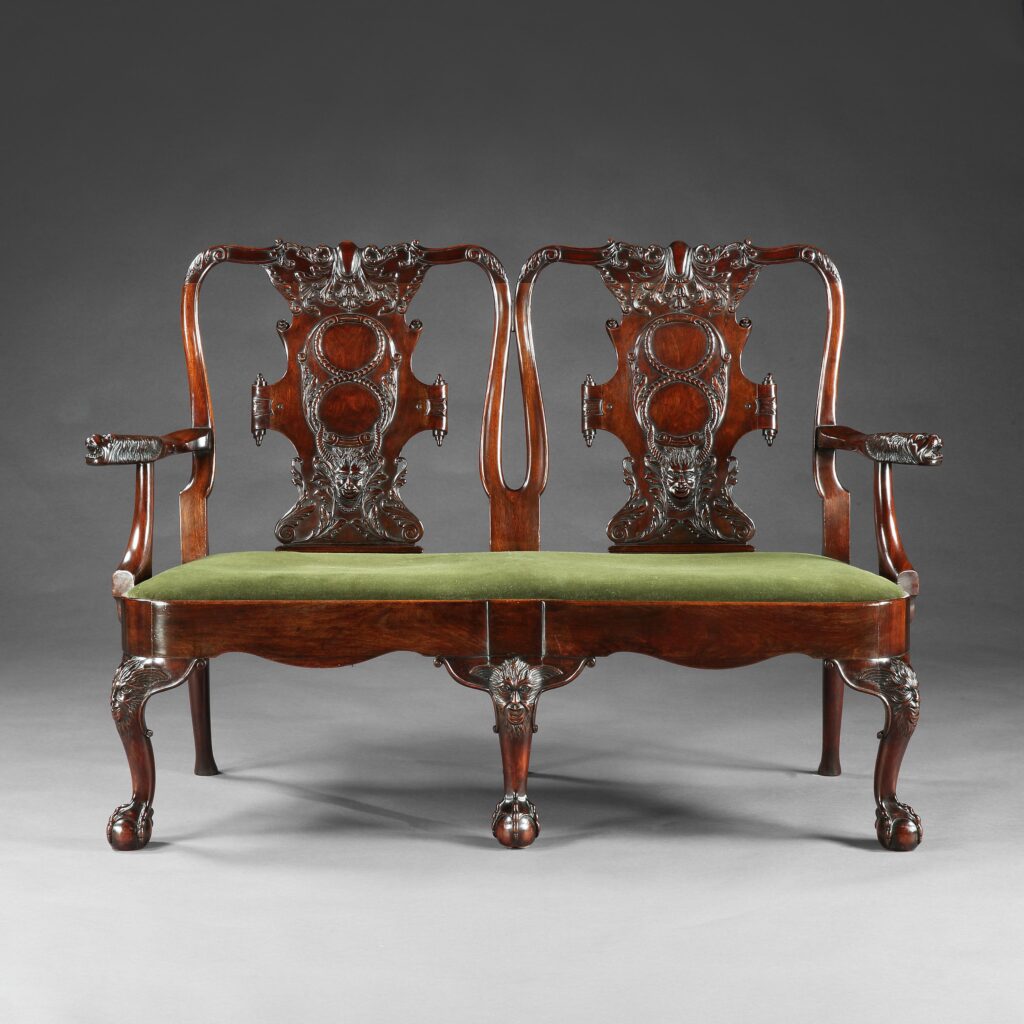 The carved and shaped chair back settee is in the solid with two central back splats that have been expertly carved and shaped with delicate tracery work and crisply carved satyr masks. The back splats are in full relief below a hooped top shaped rail with the arms below being carved and out swept with lions' heads.
The drop-in seat has recently been re-upholstered in a green cover and sits above a figured and shaped frieze with repeated satyr masks to the knees and flanked by 'C' scrolls and raised on ball and claw feet.

Although the design is 18th century, the manufacture is late 19th century. The mahogany used is 18th century and the exact settee is illustrated in 'The Age of Mahogany and The Age of Satinwood, Volume 2, The History of English Furniture' by Macquoid, illustration 58, page 66, and was retailed by J. Mallett and Son. The book describes the settee as a period 18th century settee but the construction is made with mahogany seat rails and not oak and is therefore late 19th century and of the highest quality by James Hicks.

James Hicks's furniture has impeccable craftmanship and is invariably graceful and easy to place in any home. When he first started his own business in 1894, the Celtic Revival movement was at its height, yet Hicks showed no interest in producing items with a distinctly 'Irish' appearance. By the time he died in 1936, the modernist movement had permeated Ireland but evidence of this is non-existent in his work. Instead, Hicks was content to design and manufacture what might be called pastiche 18th century English furniture.

Except on a handful of pieces, he did not employ Irish motifs, such as the lion's claw foot or central mask on tables, which had been so popular during the early and mid 18th century. Hicks' preference was for designs from a slightly later period, when neoclassicism had come into favour; Adam, Sheraton and Chippendale were his three muses.

A specific influence has been traced to the late 18th century cabinet maker William Moore, who moved to Dublin in 1782 after training in London with the firm of Ince and Mayhew.

The son of a chair maker, James Hicks was born in Dublin and, after serving an apprenticeship in London, he returned to open premises in his native city on Lower Pembroke Street in 1894. His success appears to have been rapid: in 1903, Princess Victoria, daughter of Edward VII, bought a number of his pieces; the king himself is also supposed to have purchased a set of chairs; and two years later the newly married Crown Princess of Sweden ordered Hicks' furniture for her palace in Stockholm. In 1928 Hicks was commissioned to furnish the Dail and Seanad in Leinster House and he refurnished Cabinteely House after 1933 for Joe McGrath.

In 'The Arts & Crafts Movements in Dublin and London, 1885-1925', published last year, Nicola Gordon Bowe quotes Daisy, Lady Fingall, as recalling that in 1904 Hugh Lane arranged for Hicks to make shelving and bookcases for her home, Killeen Castle. "His own high standard of art", she remembered, "would not allow him to produce anything unworthy of the great tradition of cabinet making from which he was descended."

In her memoirs Lady Fingall also referred to Hicks possessing "an untidy workshop in Pembroke Street, where many great people visited him". His firm employed some 24 cabinet makers and artisans, supervised by Hicks, who seemed to have been particularly preoccupied with high standards.

According to Desmond Fitzgerald, the Knight of Glin, Hicks' marquetry was done to his designs by Harry Sherrard of Liffey Street, while carving was usually left to James Levins Snr and Jr; they would have been responsible for the Rococo style mirrors produced by Hicks and for the friezes featured on certain table fronts.

Hicks' nephew, Harry, was another member of staff, who worked on Titania's Palace, the doll's house designed by Sir Neville Wilkinson, the framework of which was built of mahogany in eight sections in the Pembroke Street workshop. Mahogany was the most common material used, but his work also features a variety of imported woods such as satinwood, tulipwood and rosewood. Furniture by Hicks regularly won awards when exhibited at fairs, including the Gold Trophy at the 1928 Aonach.

Although he found time to teach at craft schools in Dublin, Hicks, who died in 1936, seems to have had few successors and certainly none of his calibre. He was, in effect, this country's last master cabinet maker of the old school. His want of innovation, occasionally the subject of critical comments during Hicks' lifetime, never deterred admiration either then or since.

Excellent
The chair back settee is comfortable and the Satyr's mask is conveniently carved at the low end of the back splat to avoid discomfort to the sitter.

This impressive chair back settee is attributed to the celebrated Dublin cabinet maker, James Hicks and Sons of 5 and 6 Lower Pembroke Street. James Hicks was born in 1886, the son of chairmaker, Patrick Hicks. The family may have been associated with the Dublin cabinet making firm of Michael Butler, living next door in Upper Abbey Street. Butler made some of the finest 18th century revival Irish mahogany furniture and dealt in antique furniture.

James Hicks set up his own business in Lower Pembroke Street, in 1894, having worked in Tottenham Court Road, London. He described himself as 'Cabinet Manufacturer, Collector and Restorer of Chippendale, Adam and Sheraton furniture', and included among his clients, several members of the Royal family as well as the aristocracy.

Hicks had many important patrons and President Cosgrave in 1928 gave the firm the big commission of fitting out the Dail and Senate in the new Parliament in Leinster House and work was done in the Four Courts. Sets of Chippendale style chairs were ordered for the President's house - Aras an Uachtaráin - and the Irish Embassy in Berlin. Hicks died in 1936.

The two links below illustrate his quality in furniture making and reflecting on the past masters of the 18th century. 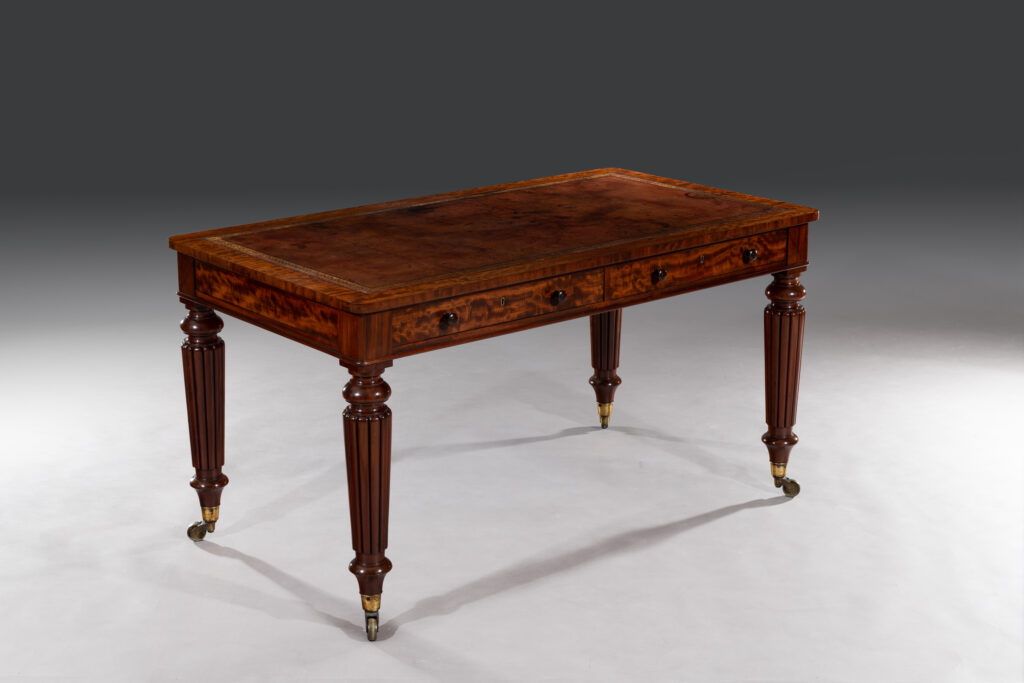 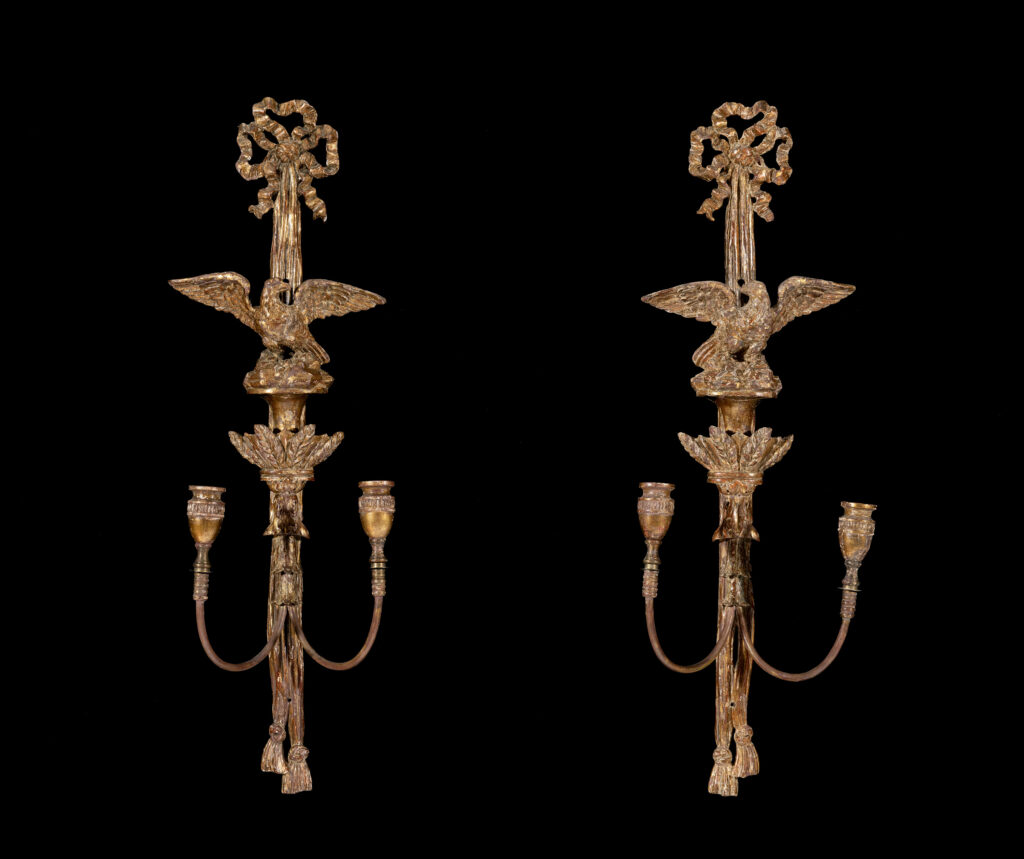 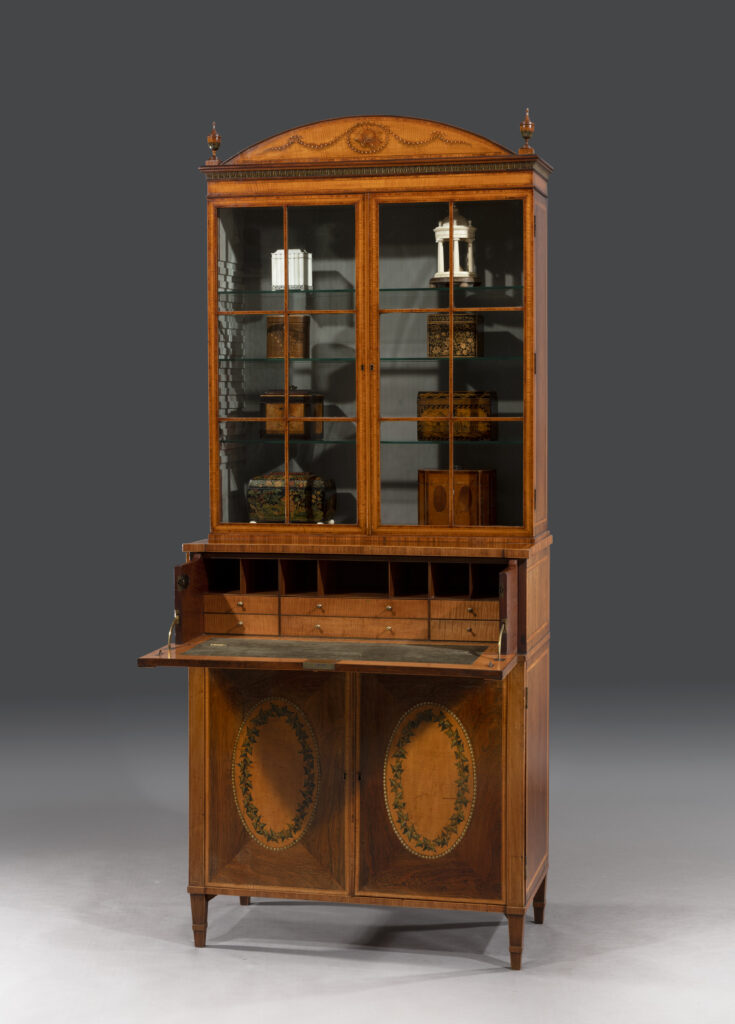