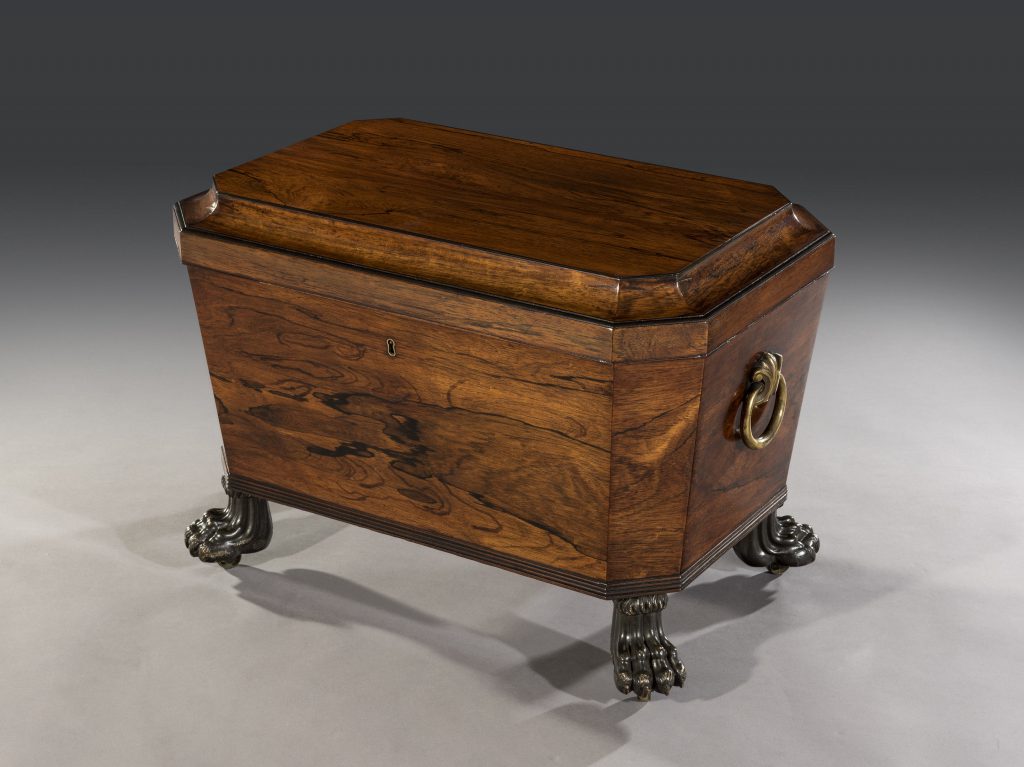 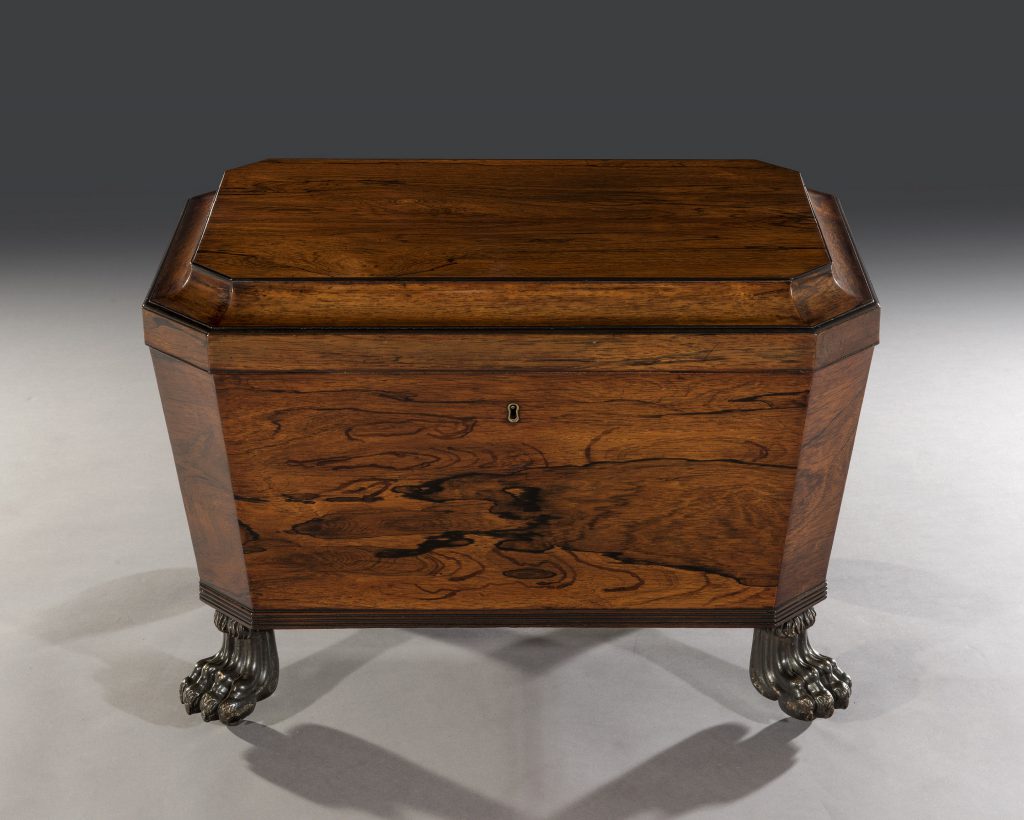 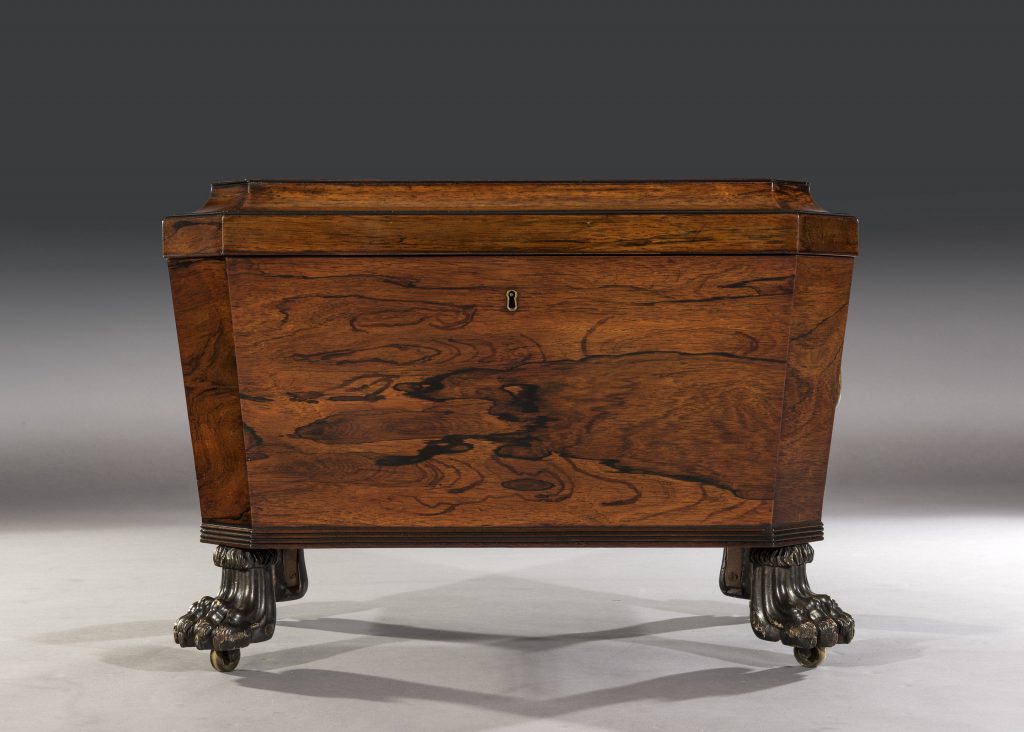 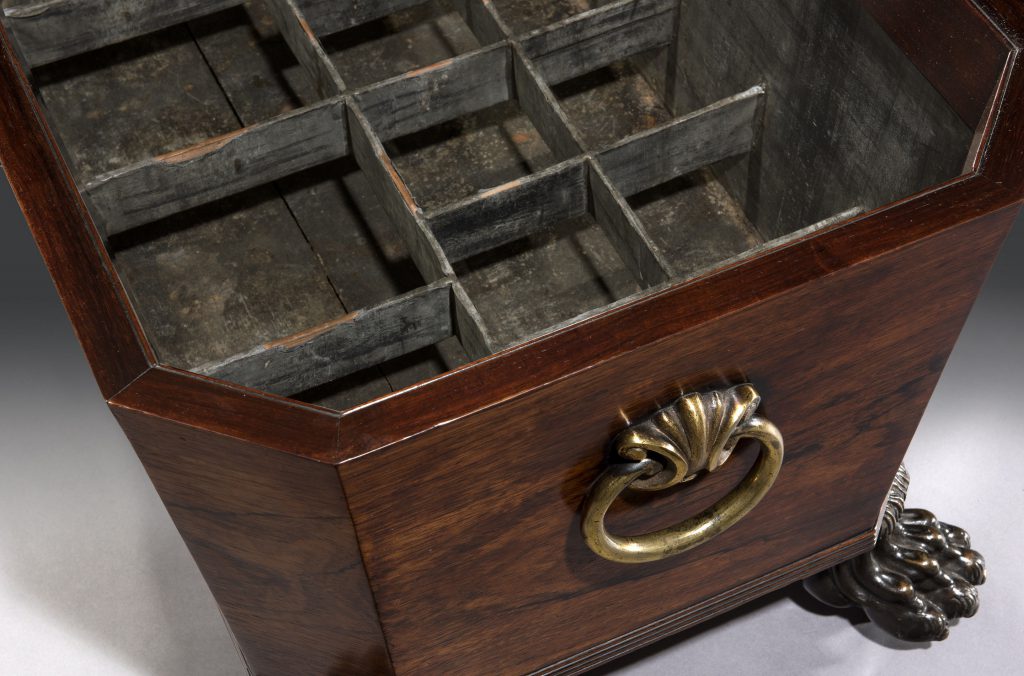 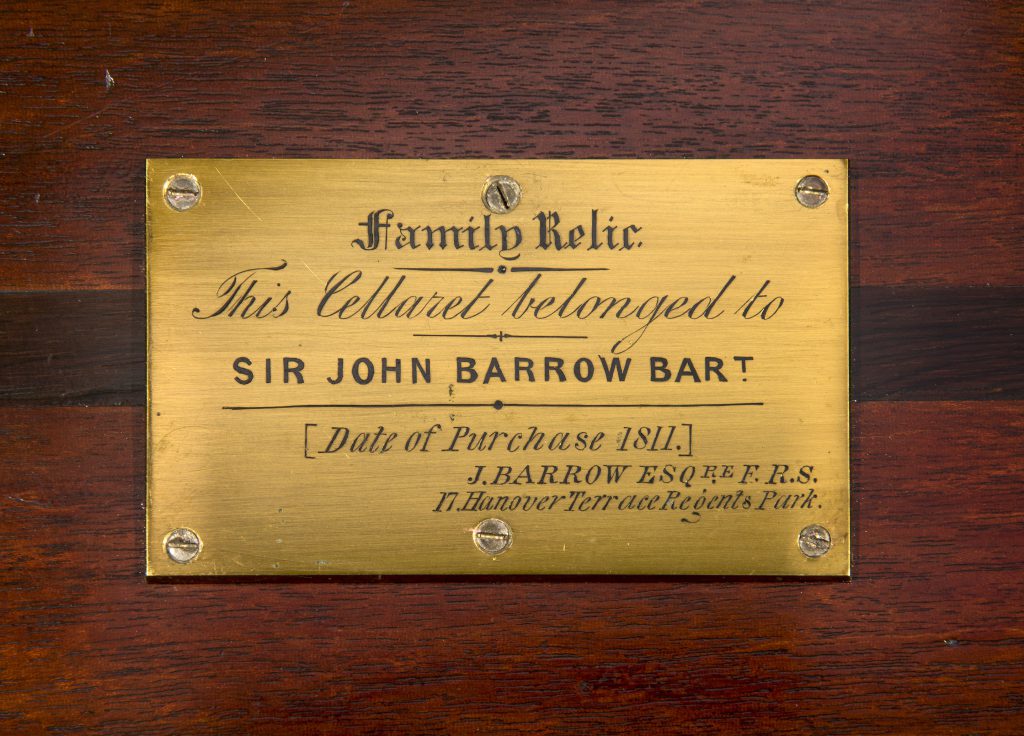 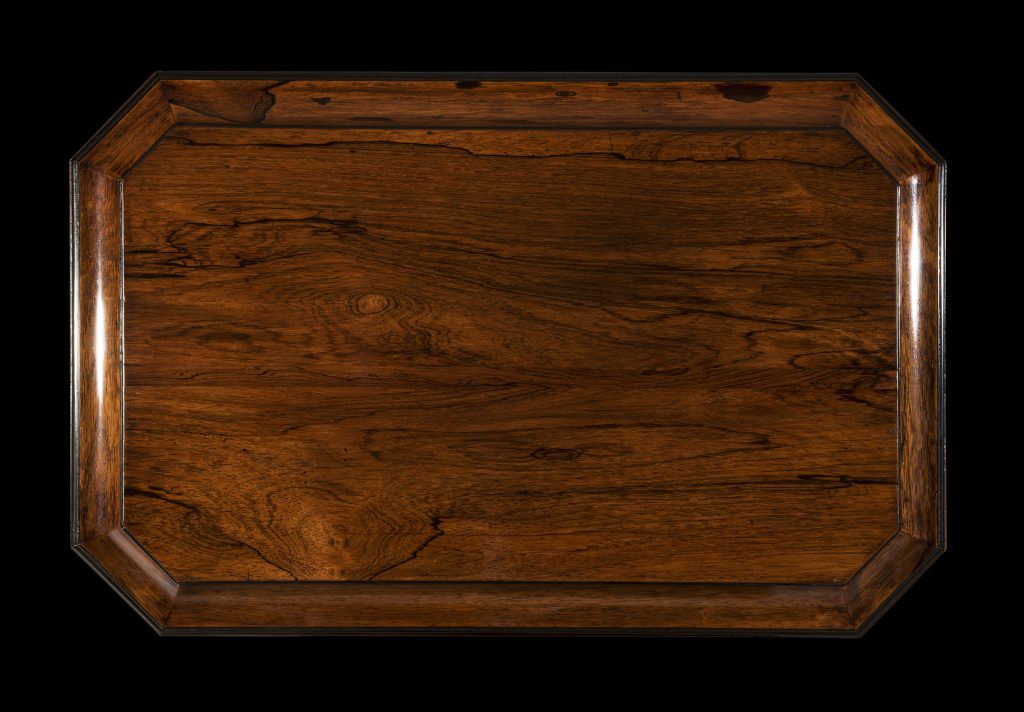 The figured rosewood sarcophagus-shaped top with ebony and ebonized mouldings lifts up to reveal a fully fitted and divided cellaret complete with the original zinc lining. On the inside of the lid is an engraved brass plaque with the inscription: Family Relic, This Cellaret belonged to, Sir JOHN BARROW BART, Purchased 1811, J. BARROW ESQ Re.R.F.S, 17 Hanover Terrace, Regents Park.

Early life: Barrow was born the only child of Roger Barrow, a tanner in the village of Dragley
Beck, in the parish of Ulverston, Lancashire. He was schooled at Town Bank School, Ulverston,
but left at age 13 to found a Sunday school for the poor.
In 1765, Barrow was employed as superintending clerk of an iron foundry at Liverpool. At only
16, he went on a whaling expedition to Greenland. By his twenties, he was teaching
mathematics, in which he had always excelled, at a private school in Greenwich.

China: Barrow taught mathematics to the son of Sir George Leonard Staunton; through
Staunton's interest, he was attached on the first British embassy to China from 1792–94 as
comptroller of the household to Lord Macartney. He soon acquired a good knowledge of the
Chinese language, on which he subsequently contributed articles to the Quarterly Review; and
the account of the embassy published by Sir George Staunton records many of Barrow's
valuable contributions to literature and science connected with China.
Barrow ceased to be officially connected with Chinese affairs after the return of the embassy in
1794, but he always took much interest in them, and on critical occasions was frequently
consulted by the British government.

South Africa: In 1797, Barrow accompanied Lord Macartney as private secretary in his
important and delicate mission to settle the government of the newly acquired colony of the
Cape of Good Hope. Barrow was entrusted with the task of reconciling the Boer settlers and
the native Black population and of reporting on the country in the interior. In the course of the
trip, he visited all parts of the colony; when he returned, he was appointed auditor-general of
public accounts. He then decided to settle in South Africa, married, and bought a house in 1800
in Cape Town. However, the surrender of the colony at the peace of Amiens (1802) upset this plan. During his travels through South Africa, Barrow compiled copious notes and sketches of the
countryside that he was traversing. The outcome of his journeys was a map which, despite its
numerous errors, was the first published modern map of the southern parts of the Cape Colony

Career in the Admiralty: Barrow returned to Britain in 1804 and was appointed Second
Secretary to the Admiralty by Viscount Melville, a post which he held for almost forty years.
Lord Grey took office as Prime Minister in 1830, and Barrow was especially requested to
remain in his post, starting the principle that senior civil servants stay in office on change of
government and serve in a non-partisan manner. Indeed, it was during his occupancy of the
post that it was renamed Permanent Secretary.
Barrow enjoyed the esteem and confidence of all the eleven chief lords who successively
presided at the Admiralty board during that period, and more especially of King William IV while
lord high admiral, who honoured him with tokens of his personal regard.
In his position at the Admiralty, Barrow was a great promoter of Arctic voyages of discovery,
including those of John Ross, William Edward Parry, James Clark Ross and John Franklin. The
Barrow Strait in the Canadian Arctic as well as Point Barrow and the city of Barrow in Alaska
are named after him.

Barrow was a fellow of the Royal Society and received the degree of LL.D from the University
of Edinburgh in 1821. A baronetcy was conferred on him by Sir Robert Peel in 1835. He was
also a member of the Raleigh Club, a forerunner of the Royal Geographical Society.
Retirement: Barrow retired from public life in 1845 and devoted himself to writing a history of
the modern Arctic voyages of discovery (1846), as well as his autobiography, published in 1847.
He died suddenly on 23 November 1848. The Sir John Barrow monument was built in his
honour on Hoad Hill overlooking his home town of Ulverston, though locally it is more
commonly called Hoad Monument. Mount Barrow and Barrow Island in Australia are believed
to have been named for him.

Excellent, retaining good colour, patination and lustre. The cellaret comes with a piece of glass left behind by the previous owner which can be placed on top of the wine cellaret to transform the item into a small coffee table!