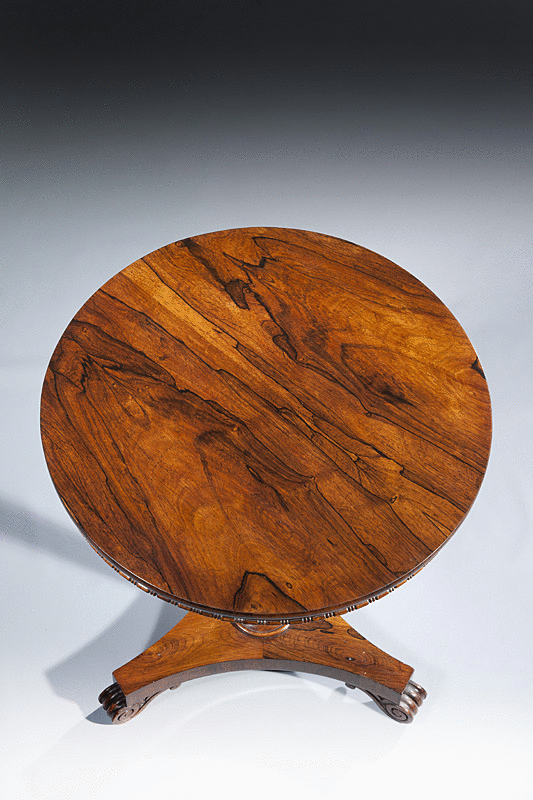 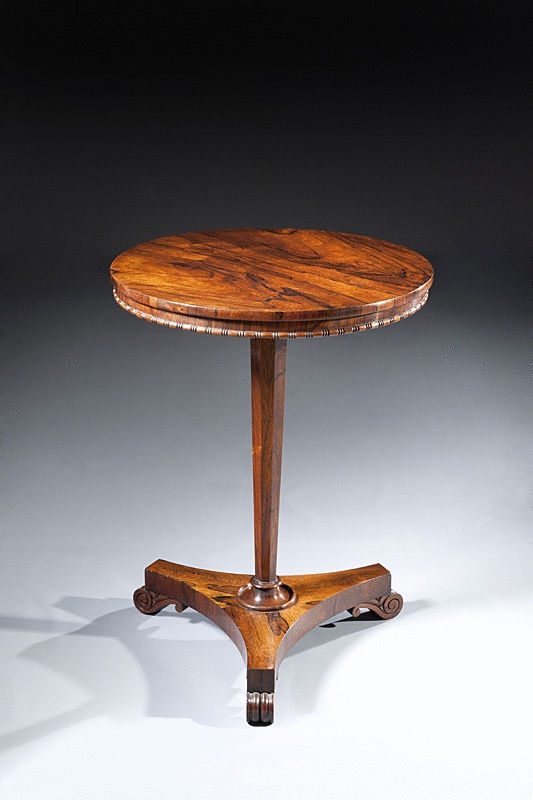 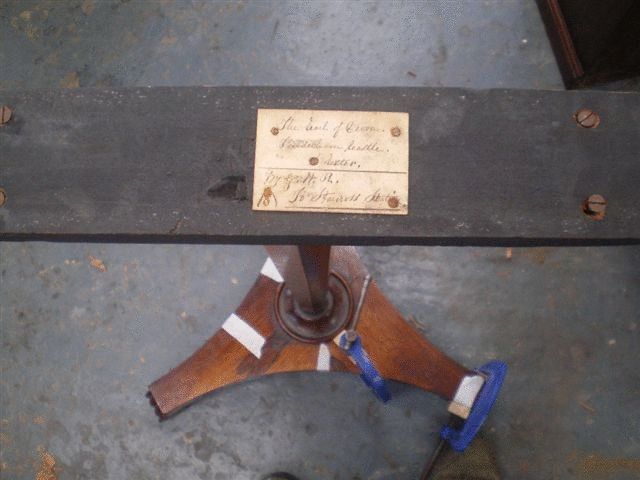 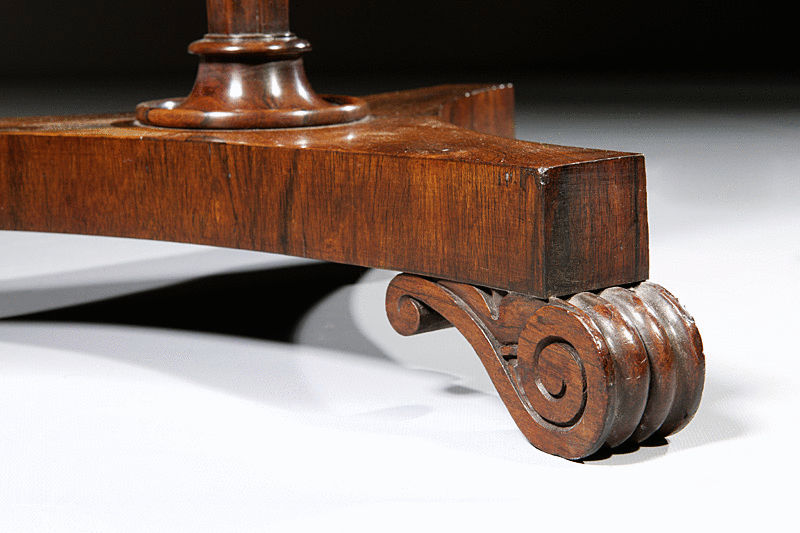 The highly figured book matched veneers sit on an impressive inverted pedestal stem on a rosewood veneered triform base.

The table was previously owned by the Earl of Devon, Powderham Castle, Devon. There is a paper label attached to the top side of the saddle of the table. This is scribed, Earl of Devon Star Cross Station Powderham Castle Exeter by G. W. R. to Starcross Station. This was a delivery label fitted to the table, when it was transported from London to Powderham Castle for the 11th Earl of Devon. Interestingly the table predates the railway station and in fact GWR (Great Western Railway) did not open the railway line or station until 1856. The Earl of Devon must have requested that the table travel down to Powderham Castle in the 1860s and William Reginald Courtenay, 11th Earl of Devon (14 April 1807 18 November 1888) In 1841 Devon was elected to Parliament for South Devon as a Tory. However, when the Tories split over the Corn Laws in 1846, he joined the Peelites. In 1849 Devon was appointed poor-law inspector and retired from the House of Commons. He then served as secretary to the Poor Law Board from 1850 to 1859. The latter year he succeeded his father and took his seat in the House of Lords. He had returned to the Conservative Party (the official name of the Tory Party since the 1850's) before his succession, and when the party came to power in 1866 under the Earl of Derby, Devon was appointed Chancellor of the Duchy of Lancaster (although without a seat in the cabinet) and admitted to the Privy Council. He remained in this post until May the following year, when he became President of the Poor Law Board. However, in contrast to his predecessor in the post, Gathorne Hardy, he was not included in the cabinet this time either. Devon continued as President of the Poor Law Board until the Conservatives lost power in December 1868. After this he stopped taking an active part in politics. Apart from his participation in national politics, Devon was heavily involved in local affairs and charitable causes in his home county of Devon. Regarded as the most influential man in the county, he notably served as a director and later as chairman of the Bristol and Exeter Railway. Known as "the good earl", a statue of him was erected in Exeter, paid for by public subscription. Lord Devon married Lady Elizabeth Fortescue, daughter of Hugh Fortescue, 1st Earl Fortescue, in 1830. They had three sons and one daughter. Lord Devon died at his seat of Powderham Castle in November 1888, aged 81. He was succeeded in the earldom by his youngest but only surviving son Edward. Powderham Castle is located south of Exeter, Devon, England.[1] The Powderham Estate, in which it is set, runs down to the western shores of the estuary of the River Exe between the villages of Kenton and Starcross. The castle was built between 1390 and 1420 by Sir Philip Courtenay. The Castle remains in the hands of his descendant, the Earl of Devon. It was extensively altered in both the 18th and 19th centuries, most notably by James Wyatt in the 1790s. The staircase, hall, music room and master bedroom of the house were used as locations for the 1993 film The Remains of the Day. The house was also used as a setting for a recent film comedy, Churchill: The Hollywood Years.