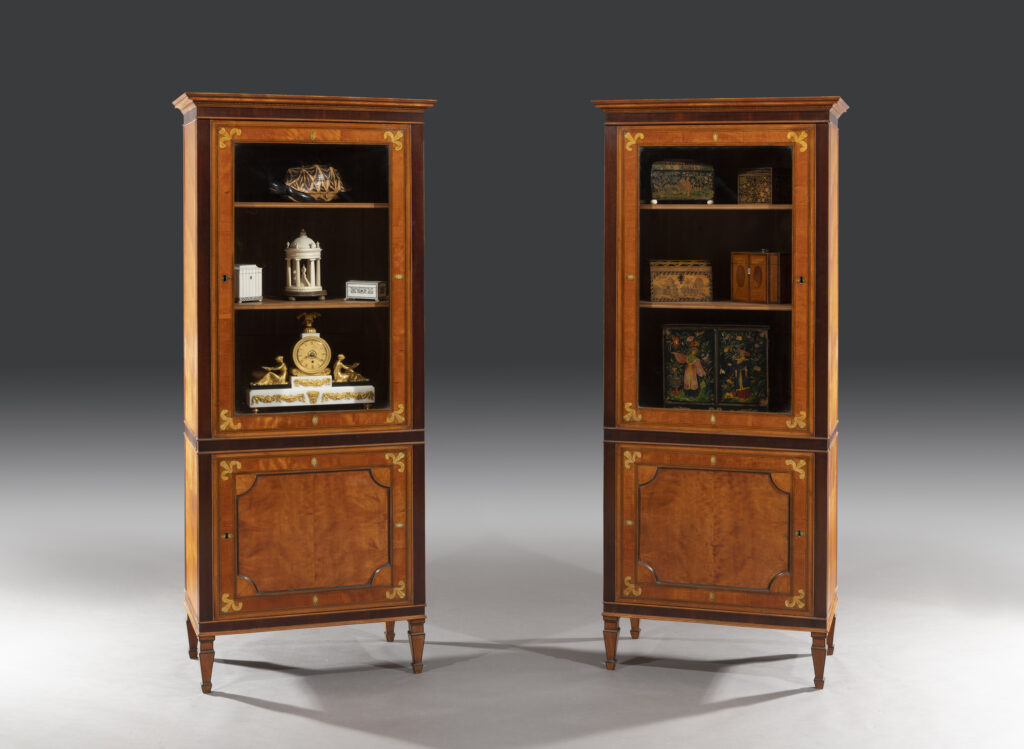 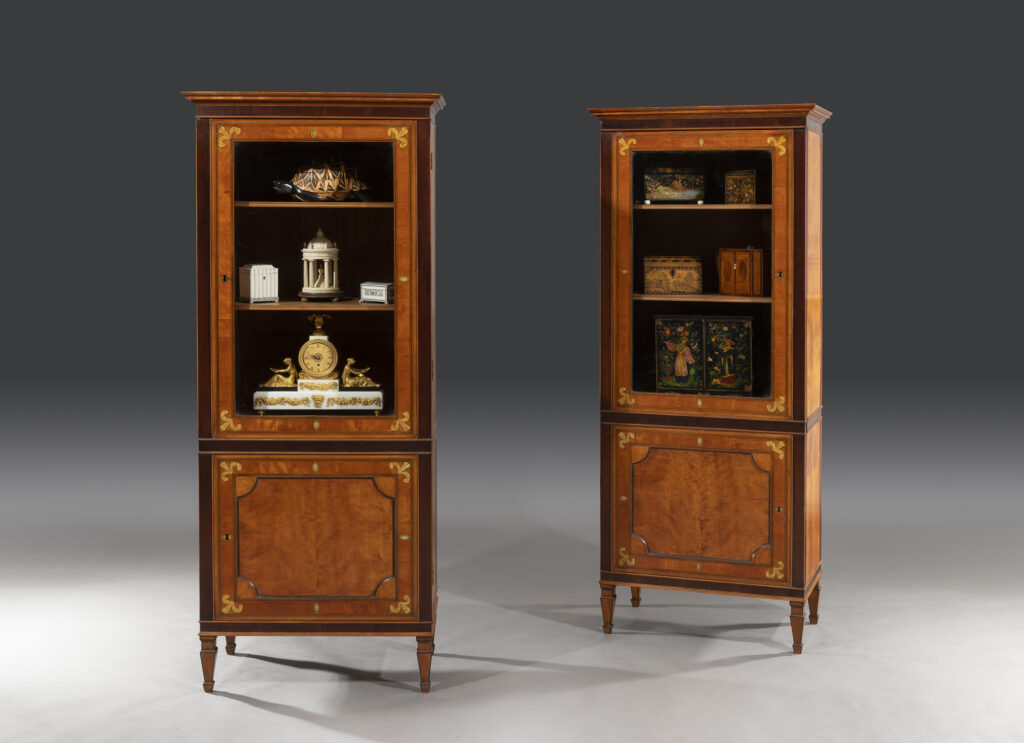 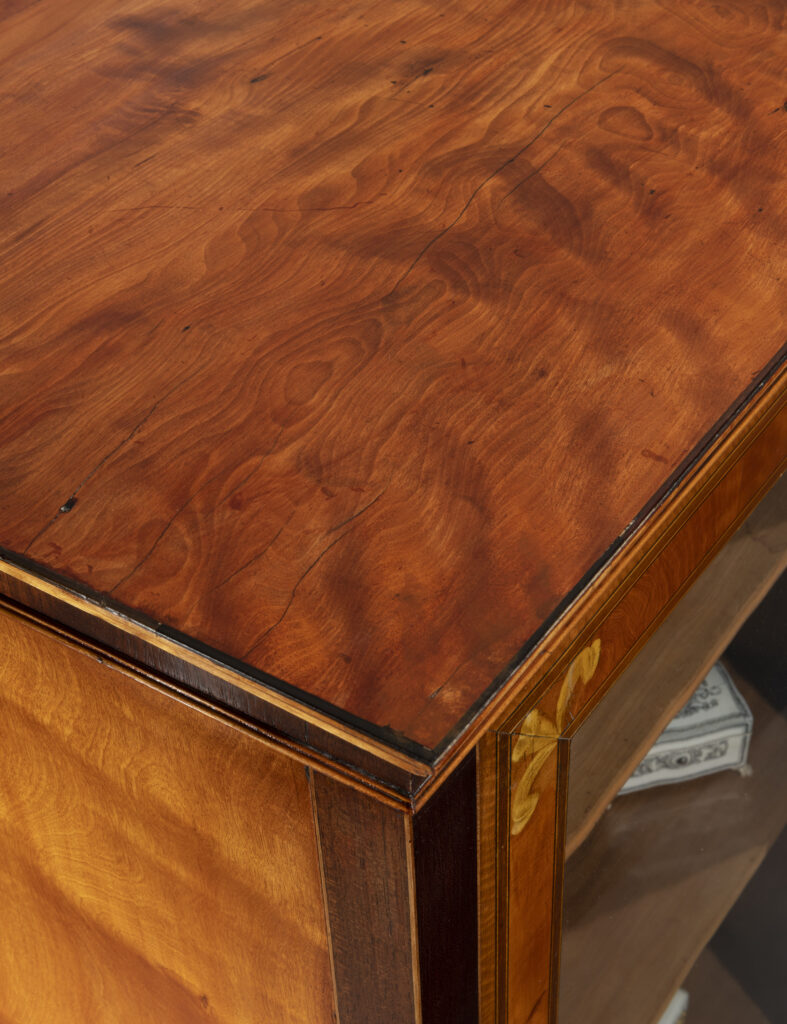 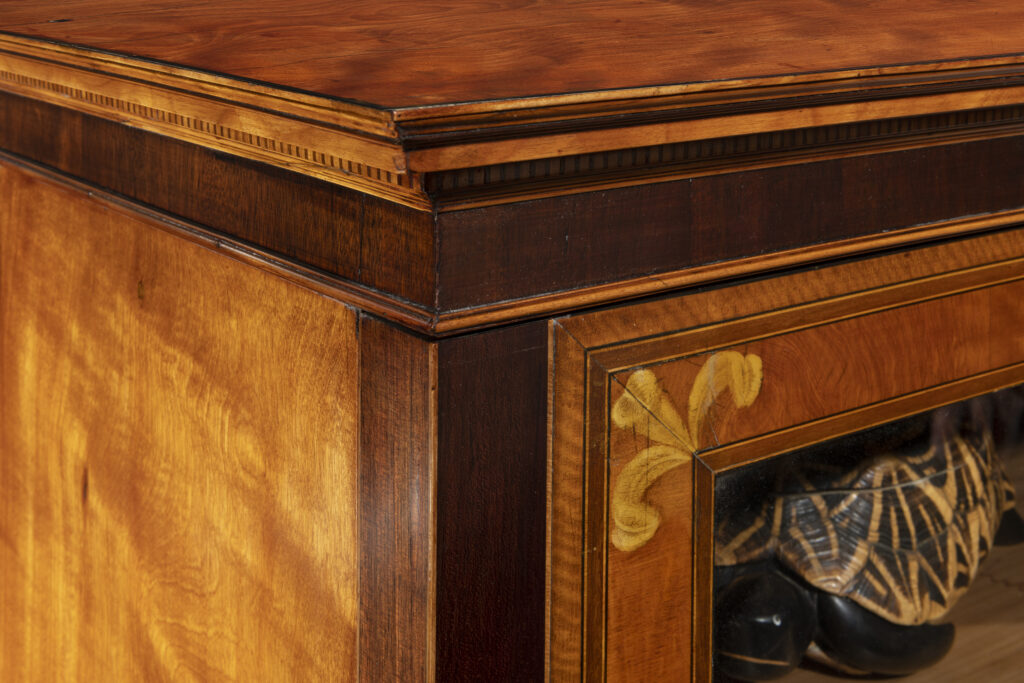 A pair of late George III 18th century period West Indian satinwood, purplewood and polychrome painted display cabinets attributed to Seddon, Son & Shackleton. The rectangular moulded tops are veneered in satinwood and inlaid with boxwood and ebonised lines above satinwood mouldings surmounted on a purpleheart and a satinwood chequer-banded frieze. The purpleheart uprights and verticals are contrasted with highly figured satinwood veneers throughout and the glazed doors retain the original glass and open to reveal four adjustable shelves. The cabinet doors open as one and the glazed section sits above a faux bottom panelled section. The original polychrome decoration to cabinet doors is decorated with the Prince of Wales feathers, paterae and cross banded in faded purpleheart and boxwood stringing. The display cabinets are raised on square tapered legs and turned spade feet, inscribed to the reverse 'Hope Esq....'

The painted decorated cabinets are firmly associated with the firm of Seddon. In around 1790 George Seddon took his son-in-law Thomas Shackleton into the business and they traded as Seddon, Son and Shackleton from 150 Aldersgate Street. Painted furniture from this period is known to have been a feature of the firm's output thanks to two documented commissions: Hauteville House, St Peter Port, Guernsey (1790) and Bridwell House, Dorset (1792-3). The Hauteville commission included a set of eighteen painted satinwood elbow chairs with three matching window seats (see 'A Catalogue and Index of old Furniture and Works of Decorative Art, Pt III', M. Harris and Sons, p.386-9, and the Bridwell commission, a satinwood card table and pair of Pembroke tables, see C. Gilbert and G. Beard The Dictionary of English Furniture Makers 1660-1840, 1986, pp.796-7.) A pair of D-shaped polychrome decorated pier tables where Seddon was considered to be a possible maker were sold at Sotheby's The Leverhulme Collection, Thornton Manor, 23 June 2001, lot 186.

The firm of Seddon (1753-1868) was the largest furniture making firm in London in the last quarter of the 18th century, yet few labelled or documented pieces are known so it is difficult to typify a definition of the house style. It was remarked by Sophie von La Roche during her visit to Seddon’s showroom in 1786, that Seddon was, ‘constantly devising new forms’.

They had commissions for Charles IV of Spain, Windsor Castle and various country houses including Hauteville House in Guernsey and Bridwell house in Dorset. The company traded under many different names but used Seddon, Son & Shackleton from 1788 to 1798. The combination of elegant painted decoration and satinwood used in these cabinets is reflective of the company’s output in this period.
The firm traded under different names, reflecting which family members were involved in the business; they were styled Seddon, Son and Shackleton for only eight years, from 1790 until Thomas Shackleton (George Seddon's son-in-law) left to go into partnership with George Oakley in 1798.