Collection of British Vintage Biscuit Tins from Six Manufacturers including Huntley & Palmers and Macfarlane Lang & Co. dated from 1885 to 1930 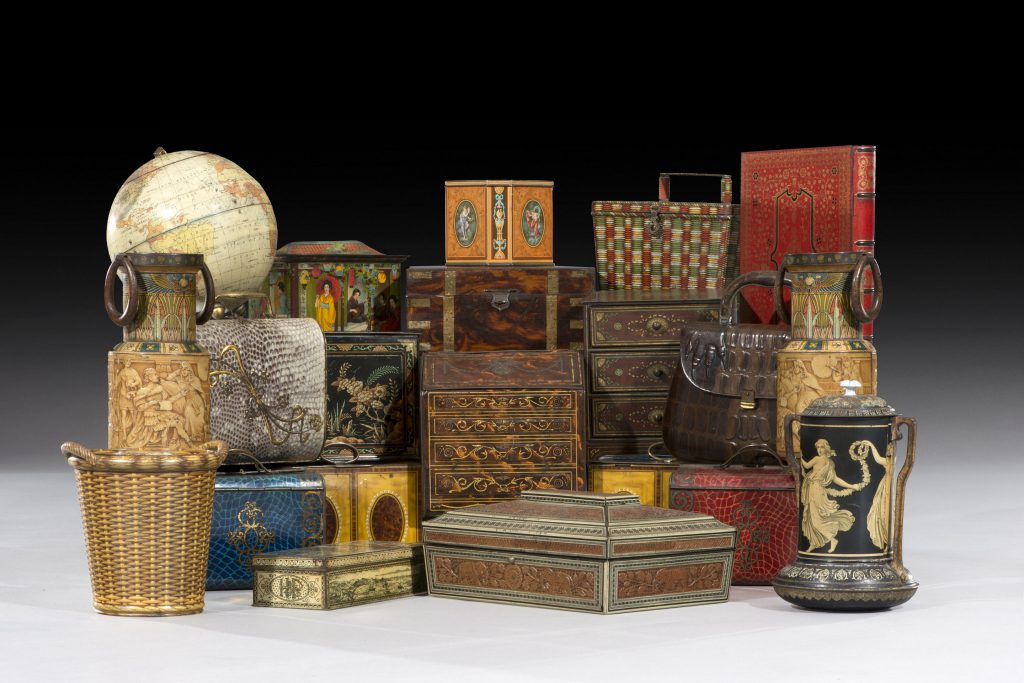 Home » Collection of British Vintage Biscuit Tins from Six Manufacturers including Huntley & Palmers and Macfarlane Lang & Co. dated from 1885 to 1930

Collection of British Vintage Biscuit Tins from Six Manufacturers including Huntley & Palmers and Macfarlane Lang & Co. dated from 1885 to 1930

From left to right: No. 1 Huntley & Palmers - Terrestrial Globe Circa 1906 The globe is polychrome decorated and stands on four ball feet. No. 2 Macfarlane Lang & Co. – Japanese Tea House decorated with Geisha Circa 1904 This is made in the form of a Japanese Tea House. By making the roof slightly concave, the designers give an ‘Oriental’ look to the shape of the building. The basic shape of the tin is really fairly simple, but the roof and the Japanese figures and detailing make this an exotic and very attractive tin. No. 3 Huntley & Palmers – ‘Muses’ Tin Circa 1939 The tin has simulated veneers and inlay with oval simulated ceramic representations of a muse on each of the four larger sides and simulated inlay on the smaller ones. No. 4 Huntley and Palmers – Hamper Circa 1904 This tin has a lot of charm. Like the ‘Basket’ (No. 13), this tin is also textured as well as printed to simulate basket-work. The two small handles add to the realistic look, but the most inspired idea is the little luggage label which was designed to act as a pull tab to open the lid. Often in examples of this tin, either the hinge is broken, one or both handles are missing or (most commonly) the luggage label is missing. No. 5 Huntley & Palmers - Book Circa 1930 This is based on an early 18th century book in the British Museum (Het Boek der Gebeden, 1704). The tin still has the original interior wrapping paper for the biscuits and is in excellent condition. No. 6 Huntley and Palmers – Pair of Egyptian Vases Circa 1924 Each vase has a lift-off lid and two handles. The stone-coloured panels, as if carved in relief, are embossed. The high spots on embossed tins are always prone to wear, but these are in good condition. These vases are said to be designed as a direct result of the discovery of the tomb of Tutankhamun in 1922. No. 7 Huntley & Palmers - Lizard Skin Handbag Circa 1910 The bag is detailed with gilded flowers No. 8 Jacob’s – Chinese Lacquer Tea Caddy Circa 1924 This is in the form of a black lacquer cabinet. It is a smart decorators’ piece which is nicely detailed with embossed hinges. No. 9 MacFarlane Lang & Co - Victorian Brass Bound Writing Box Decorated in faux mahogany, the lid opens to reveal a faux tooled leather interior. 20cm wide No. 10 Marfarlane Lang & Co. – ‘Chippendale’ Chest of Drawers Circa 1904 This is a simulated inlaid chest of three drawers with brass knobs. (Not very air-tight for the biscuits!). The biscuit companies had discovered by 1904 that apart from attractive decoration, they could be imaginative with the form of their tins to attract customers. Tins which children could play with (this one lends itself to be used as a chest of drawers for dolls or other toys) tend to be rarer and, if they do survive, may be more damaged. It would also be used for stationery etc. No. 11 Macfarlane Lang & Co - Crocodile Skin Handbag Circa 1910 The tin/bag is well detailed with a swing handle No. 12 (See No 6) No. 13 Huntley & Palmers – Basket Circa 1897 Huntley & Palmers made a couple of other tins of this shape but with leather effects in Moroccan and Viennese style. On this tin, note the textured basket effect, the fold-down handle and the Patent catch (stamped H & P Pat). Some of the cheaper tins of the period merely printed the basket effect rather than replicating the texture as well. No. 14 CWS (Co-Operative Wholesale Society) – Blue Croc Handbag Circa 1910 These are probably novelty tins made to contain CWS tea, coffee or cocoa. (See inside lid) Usually biscuit tins from CWS in this period had the place name of their biscuit factory, Crumpsall, and the fact that they contained biscuits, on the base. No. 15 Crawfords – Satinwood Tea Caddy Circa 1938 This is a representation of an 18th century tea caddy with simulated veneers and inlay. No. 16 Victory Chlorodyne & Gum Factory - Georgian Fall Front Bureau The bureau is decorated with classical design and the inner lid with an image of the factory. No. 17 Crawfords – Satinwood Tea Caddy Circa 1938 This is a representation of an 18th Century tea caddy with simulated veneers and inlay. No. 18 CWS (Co-Operative Wholesale Society) – Red Croc Handbag (See No. 14) No. 19 Macfarlane Lang & Co. – Wedgewood Vase Circa 1909 The two-handled vase has a lift-off lid with a ceramic knob. The tin designers produced a wide variety of tins in simulated materials such as wood, basketwork, lacquer, and in this example, ceramics. No. 20 Huntley & Palmers – ‘Seasons’ Box Circa 1885 The tin has restrained black designs on a cream/white background. The oval panels on the lid represent the four seasons in rural settings, while the two long sides depict the sea - a bay with shipping. These are mainly sailing vessels, but one has smoke coming from the chimney. Marked in tiny letters on one of the sides is “B&M Pat”, which refers to Bryant and May holding the patent for this method of tin printing. ‘B&M Pat’ appears on most Huntley and Palmers’ tins from the 1880s and some from the 1870s. No. 21 Huntley & Palmers – Anglo Indian Sarcophagus Box Circa 1920’s The box has faux sandalwood and micro mosaic decoration.

Huntley & Palmers Huntley & Palmers was a British firm of biscuit makers originally based in Reading, Berkshire. The company created one of the world's first global brands and ran what was once the world’s largest biscuit factory. Over the years, the company was also known as J. Huntley & Son and Huntley & Palmer. Huntley & Palmers was founded in 1822 by Joseph Huntley as J. Huntley & Son. Initially the business was a small biscuit baker and confectioner shop at number 119 London Street.. At this time London Street was the main stage coach route from London to Bristol, Bath and the West Country. One of the main calling points of the stage coaches was the Crown Inn, opposite Joseph Huntley's shop, and he started selling his biscuits to the travellers on the coaches. Because the biscuits were vulnerable to breakage on the coach journey, he started putting them in metal tins. Out of this innovation grew two businesses: Joseph's biscuit shop that was to become Huntley & Palmers, and Huntley, Bourne and Stevens, a firm of biscuit tin manufacturers founded by his younger son, also called Joseph. In 1838 Joseph Huntley was forced by ill-health to retire, handing control of the business to his older son Thomas. In 1841, Thomas took as a business partner George Palmer, a distant cousin, who soon became the chief force behind its success, establishing sales agents across the country. The company soon outgrew its original shop and moved to a factory on King’s Road in 1846, near the Great Western Railway. The factory had an internal railway system with its own steam locomotives. Thomas Huntley died in 1857, but George Palmer continued to direct the firm successfully aided by his brothers, William Isaac Palmer and Samuel Palmer, and subsequently by his sons, as heads of the company. They became biscuit makers to the British Royal Family and in 1865 expanded into the European continent, and received Royal Warrants from Napoleon III and Léopold II of Belgium. At their height they employed over 5,000 people and in 1900 were the world's largest biscuit firm. They provided a wide variety of popular products, producing 400 different varieties by 1903, and mass production enabled them to price their products keenly. Another important part of their success was their ability to send biscuits all over the world, perfectly preserved in locally produced, elaborately decorated, and highly collectable biscuit tins. The tins proved to be a powerful marketing tool, and under their easily recognizable image Huntley & Palmers biscuits came to symbolise the commercial power and reach of the British Empire. The tins found their way as far abroad as the heart of Africa and the mountains of Tibet; the company even provided biscuits to Captain Scott during his 1910 expedition to the South Pole. During the First World War they produced biscuits for the war effort and devoted their tin-making resources to making cases for artillery shells. The Company was eventually taken over by Danone, but has recently resumed operations from Sudbury in Suffolk. Macfarlane Lang & Co. James Lang opened a shop and bakery in Gallowgate in 1817. His nephew, John Macfarlane, joined the business and took over when James died. A new bread factory was built at Wesleyan Street in Calton in 1880. The firm decided to move into machine-made biscuit manufacturing and opened the Victoria Biscuit Works on an adjoining site in 1886. Expansion to London followed, with the opening of the Imperial Biscuit Works in Fulham in 1903. In 1925 a new Victoria Biscuit Works with modern equipment was opened in Tollcross. Macfarlane Lang joined with other biscuit manufacturers to form United Biscuits in 1948. United Biscuits has since expanded to become one of Britain's leading food suppliers, and the Tollcross factory remains a major employer in Glasgow's East End at the beginning of the 21st century. Jacob’s The originator of the Jacob's brand name was the small biscuit bakery, W & R Jacob, founded in 1851 in Bridge Street, Waterford, Ireland by William Beale Jacob and his brother Robert. It later moved to Bishop Street in Dublin, Ireland, with a factory in Peter's Row. A factory in Liverpool was opened in 1914. In 1922 a separate English company was formed, W & R Jacob (L'pool) Ltd. The two branches separated, with the Dublin branch retaining the W & R Jacob name while the Liverpool branch was renamed Jacob's Bakery Ltd. The Jacob’s companies have since been acquired by various other food manufacturers and are now owned by United Biscuits in the UK and Jacob Fruitfield Group in Ireland. Crawfords The firm of William Crawford & Sons started in 1813 as a family bakery business in the Scottish seaport of Leith and is the oldest Scottish biscuit manufacturer. From this small beginning the company went on to become a global household name with their shortbread and biscuits attaining a national reputation. New works were established in Elbe Street and continue to function with the latest and best in machinery and appliances. The Fairfield Biscuit Works opened in Liverpool in 1897 offering a large modern food production plant with pleasant working conditions. Crawford’s was bought by United Biscuits in 1960 and continues to be positioned as an affordable manufacturer of everyday biscuits. CWS (Co-operative Wholesale Society) A Co-operative Wholesale Society is a form of Federal Co-operative through which Consumers' Co-operatives can collectively purchase goods at wholesale prices, and in some cases collectively own factories or farms. The best historical examples of this are the (English) CWS formed in 1872 by merger of 300 individual co-ops across Yorkshire and Lancashire, and the Scottish CWS, which are the predecessors of the 21st century Co-operative Group. The English CWS has inspired many imitations around the world.